Are Some Americans Driving to Mexico to Buy Cheaper Gas? 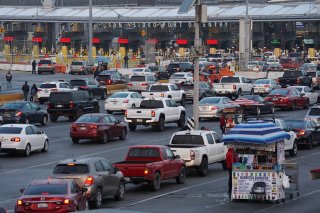 Gas prices here in the United States are still sitting well above $4 per gallon. In some California counties, the average fuel price has surpassed an eye-popping $6 per gallon.

With this in mind, it appears some Americans are taking action to save a few bucks at the pump: They are buying gas in a foreign country.

According to BBC News, “in the U.S. state of California, which consistently ranks among the highest in the nation for petrol prices, some are heading across the U.S.-Mexico border in search of savings.”

The news outlet saw evidence of this on TikTok. One example is San Diego resident Julio Vaquero, who recently posted a video that showed that he filled up his Honda Civic in Tijuana for just $40. In California, it could cost $70.

“Eight hundred pesos, filled it up. Full tank,” he says in the video that has garnered more than 1,900 likes.

“Mr. Vaquero lives about 20 minutes from Tijuana and tends to visit every other month, but he said if prices keep going the way they are, he's going to start making weekly trips to Mexico for cheaper petrol,” the BBC writes. “When he calculated the gallon price, he said $3.75 per gallon at a Chevron in Mexico was a steal compared to nearly $6 per gallon in San Diego.”

According to Patrick De Haan, head of petroleum analysis at GasBuddy, people need to keep in mind that such cost savings are all relative, which can include the distance traveled to fill up with “cheaper” fuel.

In an effort to help ease the burden of high gas prices on Americans, the Biden administration on Thursday announced that it will release one million barrels of oil per day from the nation’s Strategic Petroleum Reserve for the next six months as domestic producers ramp up production.

“I don’t want to make it sound like it’s nothing, but you just arrive at the issue where we may be off a lot more than just 1 million barrels,” he told CNBC. “So it helps, but it’s unlikely to solve the problem. In the end, it’s a little bit of a Band Aid and I think a little bit of hoping to get later in the year OPEC catch up.”