Average Gas Prices Hit $5 for the First Time in History 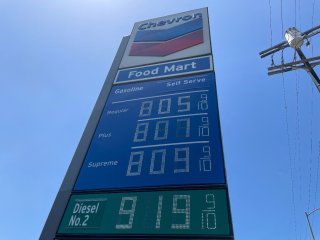 A new milestone has been hit in the year of high gas prices: For the first time, the average price of gas in the United States has reached $5 a gallon, a record high.

According to Gas Buddy, that milestone was hit on Thursday. The organization said the benchmark “comes behind months of gas price increases across the country, accelerated by the rise in seasonal demand amidst supply constraints borne out of the pandemic.”

“It’s been one kink after another this year, and worst of all, demand doesn’t seem to be responding to the surge in gas prices, meaning there is a high probability that prices could go even higher in the weeks ahead,” Patrick De Haan, head of petroleum analysis at GasBuddy, said in the company’s blog post.

“It’s a perfect storm of factors all aligning to create a rare environment of rapid price hikes. The situation could become even worse should there be any unexpected issues at the nation’s refineries or a major hurricane that impacts oil production or refineries this summer.”

The new milestone comes about three months after the average price hit $4 a gallon, for the first time since 2008. Multiple record prices have been hit in recent weeks, including when they reached $4.35 a gallon in early May.

The average price in several individual states had been over $5 in a few states, per CBS News. That average was over $5 in sixteen states as of last week.

DeHaan also tweeted Thursday that Chicago was just $0.03 away from becoming the first non-California city to post average gas prices over $6.

So far, the government’s measures do not appear to have made a huge difference for American consumers. But President Joe Biden is planning to visit Saudi Arabia in July in an attempt to urge Crown Prince Mohammad bin Salman, sometimes referred to as MBS, to lean on OPEC+ to increase oil production.

This represents a reversal from the Biden administration’s approach of treating MBS as a “pariah,” following the intelligence community’s determination that the crown prince was likely responsible for the 2018 killing of Jamal Khashoggi, the dissident journalist who lived in the United States and wrote for the Washington Post.

A Yahoo analysis found that experts are seeing demand dropping already due to the high prices.

“One could argue that demand destruction for gasoline has already started,” Peter McNally, global sector lead for industrials, materials, and energy at Third Bridge, told Yahoo Finance. "Since the start of March, U.S. gasoline consumption is 6% lower than the corresponding period in 2019," pre-pandemic.