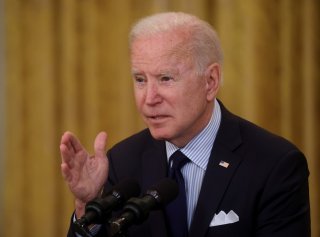 Last week, the White House reached an agreement with a bipartisan group of Senators on an infrastructure package that would represent a rare bipartisan success in Washington.

The deal is now said to be teetering, amid reports that the president plans to pass a separate bill, through the reconciliation process, that would likely only get support from Democrats.

If the bipartisan deal goes through, then Americans have some idea of exactly what will be in the bill.

The $974 billion infrastructure package would “provide clean drinking water to 10 million Americans, build 500,000 electric vehicle charging stations across the country, and connect every American to ‘reliable high-speed Internet,’” according to The Washington Post.

The deal also includes $49 billion marked for public transit and $66 billion for passenger and freight rail.

The deal, per The Washington Post, does not include a large percentage of the American Jobs Plan introduced by the president earlier this year, and all but entirely omits the adjacent American Families Plan. Elements of both would presumably be included in the separate reconciliation package.

The proposed framework includes $125 billion for “roads, highways, bridges, ports and waterways.” plus an additional sum of nearly $100 billion for “clean-energy-related projects.” Of that, $73 billion is marked for “power infrastructure, including grid authority,” and an additional $7.5 billion for electric vehicle chargers.

The package will be financed by stepped-up IRS enforcement, as well as what The Washington Post described as “a hodgepodge of measures.” In addition, $100 billion will be cut from unemployment benefits, with another $100 billion collected from “selling public infrastructure to private interests.”

All of those numbers are from the framework, and if the deal goes forward as legislation, that bill has not yet been drawn up as an actual piece of legislation, according to The Washington Post.

But one thing the infrastructure packages does not include is an additional round of stimulus checks, joining the three that were passed earlier in the pandemic. The Biden administration has shown little interest in pursuing another round of such checks, and there have been no reports that such checks were ever raised by either side during the negotiations for a bipartisan infrastructure deal.

Letters from members of Congress earlier this year had asked the Biden administration to include additional checks in the infrastructure plans, but the administration showed little appetite for doing so.

During his presidency, Donald Trump did not at any point pass an infrastructure bill. It eventually became a running joke, however, that Trump would declare a certain week “Infrastructure Week,” before ultimately getting distracted by other matters and dropping the subject of infrastructure policy altogether.