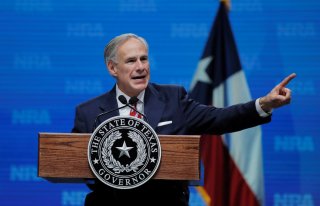 Texas became the latest Republican-led state to cut off the $300 weekly emergency federal unemployment benefits, a program that was first approved by Congress in March 2020 when the coronavirus first hit the U.S.

“The Texas economy is booming and employers are hiring in communities throughout the state,” Texas Gov. Greg Abbott (R) said in a statement. “According to the Texas Workforce Commission, the number of job openings in Texas is almost identical to the number of Texans who are receiving unemployment benefits.”

Abbott added, “There are nearly 60 percent more jobs open (and listed) in Texas today than there was in February 2020, the month before the Pandemic hit Texas.”

The governor also noted that there have been surges in unemployment fraud among the filed claims in the state, saying, “TWC estimates that nearly 18 percent of all claims for unemployment benefits during the pandemic are confirmed or suspected to be fraudulent, which totals more than 800,000 claims, worth as much as $10.4 billion if all claims had been paid.”

Texas, however, has an unemployment rate that’s higher than the nation’s average, which is at 6.1 percent. The Lone Star State has the twelfth highest across the country, landing at 6.9 percent.

More than a dozen other GOP-leaning states have also ended some form of federal emergency benefits, including the bonuses set aside for the gig economy and self-employed workers, citing labor shortages and working toward a swift economic recovery as reasons to do so. Republican governors argue that the expanded benefits have prevented Americans from returning back to work.

“There are help wanted signs posted all over Indiana, and while our economy took a hit last year, it is roaring like an Indy 500 race car engine now,” Indiana Gov. Eric Holcomb (R) said in an announcement that the state would cut off the pandemic unemployment programs on June 19. “I am hearing from multiple sector employers that they want and need to hire more Hoosiers to grow.”

Montana and Arizona have also recently joined the string of states ending benefits early and are among the few that are actually providing back-to-work benefits.

Democrats, however, condemned the Republican governors for their moves to eradicate the bonuses, claiming that the reports of workforce shortages are exaggerated.

“These workers are not just losing $300 extra per week. Many are losing everything, and their incomes will be zero,” Senate Finance Committee Chairman Ron Wyden (D-Ore.) said in a statement.

“Of course, Republicans are only cutting off economic relief to jobless workers—not businesses—showing this is all about politics and sticking it to struggling families,” he added.