Before Bernie or AOC: Socialism is Not New to America 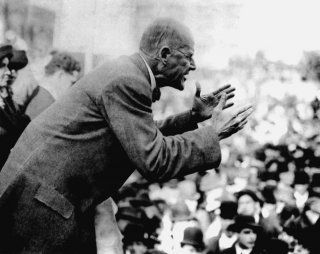 Sen. Bernie Sanders (I-Vt.) was a popular Democratic candidate in the past two presidential elections, as he grappled the frontrunner spot at one point in the 2020 race against now President-elect Joe Biden, despite touting the label of being a Democratic Socialist.

Sanders has guided a modern American socialism movement, as dozens of members of Democratic Socialists of America (DSA) were elected into state and local government positions in the 2018 midterm elections, along with Democratic Reps. Alexandria Ocasio-Cortez (N.Y.) and Rashida Tlaib (Mich.). Although Sanders doesn’t represent DSA, he has embraced democratic socialism ideals that back widespread, taxpayer-funded government programs like Medicare For All.

During President Donald Trump’s White House term, he and other GOP lawmakers have promised to halt any democratic socialism from punching American politics. At Trump’s State of the Union address earlier this year, he said “socialism destroys nations,” pointing fingers at lawmakers like Sanders and congressional members of the progressive “Squad” on Capitol Hill who “impose a socialist takeover of our health care system.”

But it’s not like the United States hasn’t experienced a wave of socialist politicians before, considering one lawmaker—Eugene V. Debs—who ran in the 1912 presidential election for the Socialist Party and received nearly one million votes, illuminating a strong presence of socialism within America’s borders.

“In fact, dozens of socialists were elected to local offices across the country between 1910 and 1912,” The Washington Post’s Gillian Brockell wrote.

In the early years of the 20th century, Americans grew shocked at concentrated corporate wealth controlled by “relatively few people, men like Andrew Carnegie and John D. Rockefeller Sr.” And so a massive labor movement emerged, with Debs propped up as a leader for the nation’s working class. Debs appealed to Americans in labor industries, encouraging them to advocate for eight hour work days, sustainable wages and other day-to-day improvements.

Debs also immediately cracked down on the corruption among Democratic and Republican leaders, becoming “the great era socialist of American history” and one of “the most important American socialists of all time.”

Newspapers across the country exposed the corruption and dishonestly from leaders on both sides of the aisle, adding to the extensive development and wins for the Socialist Party in the United States, a group that elected more than 1,000 candidates to public office, including mayors, congressmen and legislators in over 350 cities and towns. Milwaukee became the first major city to elect a socialist, as Emil Seidel, a prominent German-American politician, took the reigns as mayor from 1910 to 1912. After his term, Seidel acted as Debs’s running mate in the 1912 presidential election.

Other leaders of the movement “who have faded from the American left’s memory,” according to Dissent’s Harold Meyerson, are Oscar Ameringer, the leader of the Oklahoma wing of the party; Victor Berger and Meyer London, the two Debs-era congressmen; Morris Hillquit, an Eastern European immigrant who served as a labor lawyer in New York and ran as a socialist candidate for mayor of New York City; and Kate Richards O’Hare, a leading figure for the party who was imprisoned during World War I.

But once the United States joined WWI, the federal government set rules “to basically police and try to drum socialists out of American society,” as the party’s leaders became anti-war advocates and opposed President Woodrow Wilson—the Democratic candidate who secured a win over Debs in the 1912 race for the White House. The strict guidelines prohibited anti-war sentiment and protests, jailing those who didn’t listen, including Debs. Historian Nathan Connolly dubbed this era as a time when the government treated socialists as “anarchists” and “general terrorists,” noting that one attorney general actually formed a division within the Justice Department to weed out any socialist ideas within the U.S., ultimately killing the party for almost a century.

“The failure of both American socialism and the larger American left is the product of all of the above, a tale of missed opportunities abetted by a lethal dose of government suppression in the years during and after the First World War,” Meyerson wrote.

Other factors that contributed to the party’s collapse were the unpleasant images and reputations the socialist revolutionaries received during the vexed era, as well as the rise of Communism.

Although socialism eventually faded from the Hill, candidates from the party slightly sprouted after WWI. One politician, A. Philip Randolph, an African American labor organizer, rejected capitalism, as he believed it deepened the racial divide between white and black workers. Randolph essentially established a socialist position that fought for racial equality during the early Civil Rights Movement and the Labor Movement.

But Sanders and Ocasio-Cortez’s version of democratic socialism is the most powerful revival of the movement, yet, as the two have a huge, young support base who are energized by their contentious rhetoric.