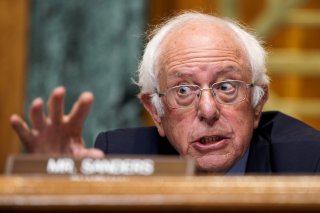 Even as the final batches of the $1,400 coronavirus stimulus checks from President Joe Biden’s American Rescue Plan continue to be disbursed to eligible Americans, Sen. Bernie Sanders took time over the weekend to remind people that Republicans played no part in sending out these potentially lifesaving funds to those most in need.

Keep in mind that to date, Congress has approved the delivery of three cash payments to most eligible Americans—a $1,200 check in the spring of 2020, $600 in December, and the current $1,400 payments. For the most recent checks, in March, the House passed Biden’s $1.9 trillion stimulus bill by a 220 to 211 vote—with all Republicans opposing it.

“Here’s a radical idea: majority rule. Not a single Republican voted to provide a $1,400 direct payment to the working class or a $3,000 Child Tax Credit,” Sanders wrote on Twitter.

“The Senate passed this important legislation with 51 votes. We must do the same with the American Jobs and Family plans,” he added.

However, it appears that Democrats still aren’t getting the credit that they deserve in some pockets of the country. According to a recent poll conducted by Rural Objective PAC, only 50 percent of voters in rural areas were found to associate the stimulus checks with Democrats. Furthermore, 32 percent associated them with Republicans, while 11 percent associated them with neither party.

Also, amid the recent calls for a fourth or even a fifth round of stimulus checks to financially help still-struggling Americans, once again, it has been mostly Democratic lawmakers pressing for green-lighting of the funds. In all, at least eighty Democrats in Congress have shown strong support for additional payments.

“The pandemic has served as a stark reminder that families and workers need certainty in a crisis,” stated a letter sent by six members of the House Ways and Means Committee to Biden.

Recent data are also pointing to the fact that the stimulus checks have given much-needed momentum to the recovery of the U.S. economy.

According to a University of Michigan study, it revealed that the stimulus checks sent out over the past year have helped many Americans avoid financial ruin—as household food shortages dropped by 42 percent and overall financial instability 43 percent.

“Our analyses thus far have yielded a fairly simple story: throughout the crisis, the level of hardship faced by U.S. households can be directly linked to the federal government’s response,” the study wrote.

The researchers added that households with incomes of less than $25,000 benefitted the most from the direct cash payments.