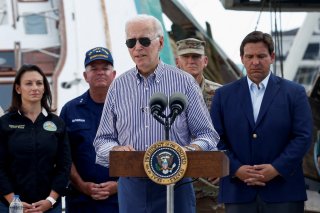 “Mr. President, welcome to Florida. We appreciate working together across various levels of government,” the Republican governor said while introducing Biden for remarks.

Biden replied: “Gov and first lady, thank you very much for the hospitality.”

“We were very fortunate to have good coordination with the White House and with FEMA from the very beginning of this,” he continued.

Earlier in the day, Biden and first lady Jill Biden took an aerial tour to get a wider look at the hurricane’s devastation before meeting with the governor.

“I'm sure it's much worse from the ground,” the president said, per ABC News. “But you can see a whole hell of a lot of damage from the air.”

Biden also touted his administration’s response so far and emphasized the federal government’s commitment to the people of Florida.

“We're not leaving till this gets done. I promise you that,” he said.

Biden and DeSantis then moved to a briefing area, where the president spoke with Republican Sens. Marco Rubio and Rick Scott.

Ahead of the Florida visit, the White House confirmed that the administration would be doubling the length of time, from thirty to sixty days, that the federal government would cover all the costs associated with search and rescue, debris removal, sheltering, and other emergency measures.

Making landfall last week as a category 4 hurricane, Ian is shaping up to be one of Florida’s deadliest and costliest storms in decades. At least a hundred people have lost their lives, though that figure could rise in the days ahead as search-and-rescue efforts continue.