Biden to Cancel $10,000 in Student Loans for Millions of Americans 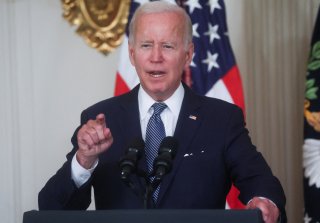 After lengthy deliberations, the Biden administration will announce on Wednesday that it will forgive some student debt.

The White House will argue that about 90 percent of the relief will go to those with household incomes of $75,000 a year or less.

It’s been clear for much of the Biden presidency that student debt relief was a very contentious issue, even inside the White House. But reporting also shows that Sen. Charles Schumer (D-NY), the Senate majority leader, was strongly encouraging the president to forgive at least some debt.

The political implications of the administration’s move are unclear. Some who already paid off their own debts are likely to criticize the move for being unfair to them, while many further to the left were hoping for more of the debt to be wiped out. There are also concerns, on which economists and other experts are divided, over whether the action could hurt inflation.

Derrick Johnson, president of the NAACP and a longtime advocate for debt forgiveness, called the reported move insufficient.

“If the rumors are true, we’ve got a problem,” Johnson said, per Politico.

“President Biden’s decision on student debt cannot become the latest example of a policy that has left Black people — especially Black women — behind. … This is not how you treat Black voters who turned out in record numbers and provided 90 percent of their vote to once again save democracy in 2020.”

"The Biden Administration has already cancelled student debt for more than 175,000 Americans in public service,” the senator and former presidential candidate said on Twitter. “This is life changing for thousands of workers like teachers and nurses. Let's keep rebuilding the middle class.”

“Asking Hoosiers who didn’t attend college or already paid off their college debt to foot the bill for others is a misguided proposal. It will do nothing to make higher education more affordable, which is what we should really be focused on,” he said.

The Times estimated that the move will have a cost of about $300 billion, although “the true cost is harder to calculate, and smaller because much of that debt was unlikely to ever be repaid.”