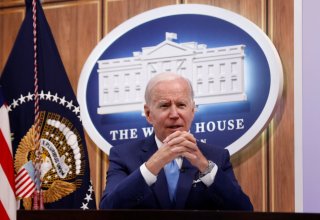 President Joe Biden said on Wednesday that he was not alerted that the country was confronting a looming shortage of baby formula until April.

As reported by CNN, the president’s comments came soon after formula manufacturers told him that the crisis would get serious during a White House roundtable on the issue. “We knew from the very beginning that this would be a very serious event,” said Robert Cleveland, senior vice president at Reckitt, which produces baby formula.

The Biden administration had previously stated that it had been working on addressing the shortages since February. “I don't think anybody anticipated the impact of one facility—of the Abbott facility,” Biden said. “Once we learned of the extent of it and how broad it was, we kicked everything into gear.”

The nationwide shortage of baby formula is largely due to the shuttering of a Michigan-based Abbott Nutrition facility because of a bacterial contamination that was discovered there. After detecting positive samples of rare but dangerous bacteria in multiple parts of the plant, the Food and Drug Administration (FDA) decided to close the facility and the company announced a massive recall of its formula in mid-February.

Though they did not participate in the roundtable, Abbott boasts roughly a 40 percent share of the U.S. baby formula market, with the Michigan facility also being responsible for 40 percent of the company’s U.S. production. The company plans to resume production at its plant on June 4 and will begin shipping out its specialty formula, EleCare, on June 20.

Despite Biden’s comments about not being informed of the baby formula crisis, White House press secretary Karine Jean-Pierre said that the administration started acting within days of the plant’s closure. “We have been doing this whole of government approach since the recall,” she said. “We have been working on this for months, for months. We have been taking this incredibly seriously.”

Meanwhile, according to the Associated Press, the White House announced that a third and fourth round of formula shipments from abroad would begin next week. They are expected to come from producer Kendamil in Britain and from Bubs Australia.

Late last week, FDA Commissioner Dr. Robert Califf told lawmakers that he expects to see a full inventory of baby formula on store shelves across the country beginning in July. “It’s going to be gradual improvement up to probably somewhere around two months until the shelves are replete again,” he stated in his testimony before the Senate Health, Education, Labor and Pensions Committee.