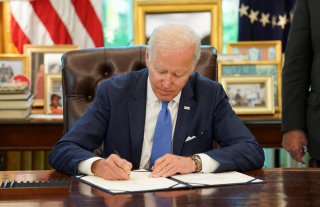 President Joe Biden admitted on Tuesday that he could drop some of the tariffs imposed against Chinese imports in an effort to tame inflation.

Per CNN, when asked by a reporter if he would drop the tariffs on China first green-lighted by former President Donald Trump, Biden said, “We're discussing that right now. We're looking at what would have the most positive impact.”

Psaki said that there continues to be “an ongoing review” of U.S. tariffs on China, adding that “we expect to do more.”

“He's weighing new ones, yes, because it's an ongoing process and there are more that are still in place,” she continued. “We are continuing to review where it would be advantageous to take steps that would help … increase wages and help certain industries that are impacted by these tariffs in a way that we don't feel is effective.”

Biden reiterated that the double whammy of pandemic protocols and Russian president Vladimir Putin’s invasion of Ukraine has driven inflation to its highest level since the early 1980s.

“I want every American to know that I am taking inflation very seriously,” Biden said.

“The first cause of inflation is a once-in-a-century pandemic. Not only did it shut down our global economy, it threw supply chains and demand completely out of whack,” Biden continued. “And this year we have a second cause: Mr. Putin’s war in Ukraine.”

Per CNBC, Biden also noted that the ongoing war has pressured the prices of contracts for key food products like wheat and corn, which are up this year by 40 percent and 30 percent, respectively. Russia and Ukraine together supply more than 25 percent of the world’s wheat.

As reported by Insider, some experts believe that rolling back tariffs would certainly help blunt current inflationary pressures.

“That would bring down inflation directly, would increase competition and the economy and indirectly, and bring down prices even more,” Jason Furman, a former top Obama administration economist, told MSNBC. “This would be the biggest step he could take that he’s not taken so far.”

On Wednesday, the Bureau of Labor Statistics reported that the consumer price index (CPI) jumped 8.3 percent in April year-over-year, only falling slightly from 8.5 percent in March. Prices rose 0.3 percent from March to April, the smallest increase seen in eight months.

Those numbers, however, were both higher than the 8.1 percent headline figure and 0.2 percent monthly gain forecast by Refinitiv economists.