Biden on Infrastructure Bill: Cut Duration, Not Number, of Programs 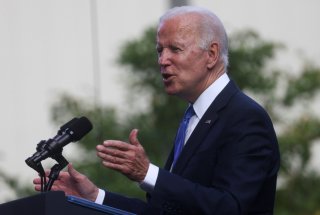 President Joe Biden weighed in on the ongoing dispute over the Senate’s stalled reconciliation infrastructure bill on Friday, recommending that the variety of programs that it funded—including roads and bridges, expanded social services, and programs designed to address climate change—be cut in duration to save money, rather than eliminated altogether.

Biden’s recommendations come as two prominent centrist Democrats—Senator Joe Manchin (D-WV) and Senator Kyrsten Sinema (D-AZ)—have come out against the reconciliation bill’s proposed $3.5 trillion price tag. Manchin argued that while some of the programs in the bill were necessary, the overall cost to taxpayers was excessive and unsustainable.

Biden’s strategy appears to be a quiet deviation from the strategy endorsed by Speaker of the House Nancy Pelosi (D-CA), who has instead recommended focusing on a handful of programs and extending them for as long as possible. In a note to Democratic legislators on Monday, she endorsed “do[ing] fewer things well” with regard to the bill.

The president took the opposite approach: “I’m of the view,” he told a group of reporters while preparing to board Air Force One, “that it’s important to establish the principle on a whole range of issues without guaranteeing to get the whole 10 years. It matters to establish it.”

In separate remarks, Biden also emphasized that there would be no deadline for a deal to be reached, and any programs left out of the final version of the bill would be proposed again at a future date.

The negotiations over the infrastructure bill have come to dominate ongoing politics in Washington, and have hampered Congress’s ability to address other issues. A smaller, $1 trillion infrastructure bill that Biden negotiated with a handful of moderate Democrats and Republicans passed the Senate in August. This was thought to be the major hurdle in the smaller bill’s approval, as filibusters are allowed in the Senate—potentially allowing conservative Republicans to stall the bill indefinitely—but not in the House, where Democrats maintain a slim majority.

However, after negotiations over the larger $3.5 trillion bill escalated, progressive Democrats led by Rep. Pramila Jayapal (D-WA) threatened to vote down the $1 trillion bill unless it was passed alongside the larger bill—a move calculated to prevent moderate Democrats from passing the smaller bill before turning against the larger one.

Although Manchin specified a $1.5 trillion price tag for the larger bill, Democrats are negotiating the current level down to around $2 trillion, and have proposed raising taxes on corporations and wealthy individuals to pay for it without adding to the national debt.