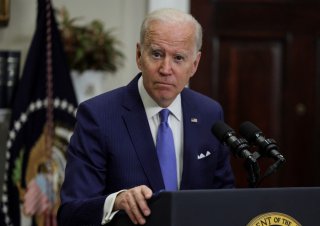 President Joe Biden took quick action to push against reports that he was on the verge of using executive action to forgive $50,000 of federal student loan debt per borrower.

“I am considering dealing with some debt reduction,” he said Thursday at the White House, per CBS News. “I am not considering $50,000 debt reduction. But I’m in the process of taking a hard look at whether or not there will be additional debt forgiveness.”

Biden continued by saying that he will “have an answer on that in the next couple of weeks.”

Just a day before, per Fox Business, Senate Majority Leader Chuck Schumer (D-NY) claimed that the president was creeping closer to wiping out up to $50,000 in student loan debt.

“I’ll keep urging the president to take this important step. And I say to my colleagues, I think the president is moving in our direction,” Schumer said on the Senate floor. “My talks with him and his staff have been very fruitful over the last little while and I am hopeful that he will do the right thing. We’re getting closer.”

Such a move by the president would directly affect more than 43 million borrowers who hold $1.75 trillion in federal student loan debt, according to the Department of Education. In addition, roughly a quarter of student loan borrowers—or 10 million individuals—are estimated to be in delinquency or default.

Schumer’s statements come as Biden, during a meeting with members of the Congressional Hispanic Caucus (CHC) earlier this week, appeared to be keen on eventually canceling some debt for college students regardless of whether they attended a public or private institution.

Rep. Tony Cardenas (D-CA), who attended the meeting, noted that the president never mentioned a specific amount he was seeking to cancel. When the lawmaker reiterated that the CHC supports the canceling of $10,000 in student loan debt, Biden said, “You're going to like what I do.”

In response to Biden’s meeting, Sen. Mitt Romney (R-UT) tweeted “Desperate polls call for desperate measures”—and even suggested that the president was trying to “bribe” voters, an odd assertion given that Biden campaigned on this policy during his presidential run.

A group of Republican senators has also introduced the Stop Reckless Student Loans Action Act—legislation that would end the Biden administration’s pause on student loan payments and prohibit it from broadly canceling any student loan debt going forward.

“As Americans continue to return to the workforce more than two years since the pandemic began, it is time for borrowers to resume repayment of student debt obligations,” Sen. John Thune (R-SD) said in a statement. “Taxpayers and working families should not be responsible for continuing to bear the costs associated with this suspension of repayment. This common-sense legislation would protect taxpayers and prevent President Biden from suspending federal student loan repayments in perpetuity.”