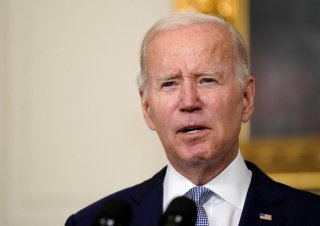 President Joe Biden on Wednesday signed an executive order to ensure women can travel out of state to access abortion procedures.

Axios reported that the president is directing Health and Human Services Secretary Xavier Becerra to consider working with states to utilize Medicaid waivers to pay for expenses for women who decide to cross state lines to receive abortions.

“This executive order also helps women travel out of state for medical care,” Biden said during the first meeting of the White House’s Task Force on Reproductive Health Care, which is focused on coordinating the federal government’s efforts on reproductive health.

“Secretary Becerra is going to work with states through Medicaid to allow them to provide reproductive health care for women who live in states where abortions are being banned in that state,” he added.

The executive order—the second one that Biden has signed off on since the Supreme Court’s controversial June ruling striking down Roe v. Wade—also directs Becerra to ensure that health care providers comply with federal nondiscrimination laws and promote research and data collection on maternal health outcomes.

“I believe Roe got it right, and it’s been the law for close to fifty years,” Biden said.

“I commit to the American people that we are doing everything in our power to safeguard access to health care, including the right to choose that women had under Roe v. Wade which was ripped away by this extreme court,” he continued.

Meanwhile, the Biden administration and abortion rights advocates received a major victor on Tuesday when Kansas voters resoundingly decided—59 percent to 41 percent—against removing the right to abortion from the state constitution. The amendment, if passed, would have paved the way for state legislators to prohibit or restrict abortions.

Kansas, where abortion is legal up to twenty-two weeks of pregnancy, was the first state to vote on abortion rights since the court overturned Roe.

Biden celebrated the vote and urged Congress to pass a law to restore nationwide abortion rights.

“This vote makes clear what we know: the majority of Americans agree that women should have access to abortion and should have the right to make their own health care decisions,” he said in a statement.

“Congress should listen to the will of the American people and restore the protections of Roe as federal law. While that is the only way to secure a woman’s right to choose, my Administration will continue to take meaningful action to protect women’s access to reproductive health care. We will continue to act where we can to protect women’s reproductive rights and access to care. And, the American people must continue to use their voices to protect the right to women’s health care, including abortion,” he concluded.