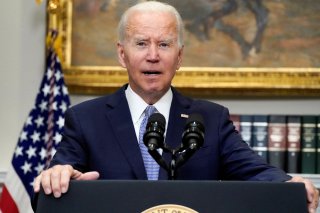 President Joe Biden this past weekend signed into law a gun control bill intended to prevent dangerous individuals from accessing firearms and increase investments in the country’s mental health system, marking a significant bipartisan breakthrough on one of the most contentious policy issues in Washington.

The final passage of the legislation came roughly a month after a devastating mass shooting at an elementary school in Uvalde, Texas, left twenty-one people dead.

“God willing, it's going to save a lot of lives,” Biden said at the White House as he completed signing the bill, according to CNN.

“While this bill doesn't do everything I want, it does include actions I've long called for that are going to save lives. Today, we say more than 'enough.' We say more than enough. This time, when it seems impossible to get anything done in Washington, we are doing something consequential,” Biden added.

“If we can reach compromise on guns, we ought to be able to reach a compromise on other critical issues, from veterans' health care to cutting edge American innovation and so much more. I know there's much more work to do, and I'm never going to give up, but this is a monumental day,” he continued.

The bipartisan gun deal includes millions of dollars for mental health, school safety, and crisis intervention programs, as well as incentives for states to include juvenile records in the National Instant Criminal Background Check System. The money can be used to implement and manage so-called “red flag” laws, which allow authorities to temporarily remove guns from people threatening violence.

Additionally, the bill closes the “boyfriend loophole,” which allowed convicted domestic abusers to purchase guns if they aren’t married to their partner, even though spouses who perpetrate domestic violence are. There are also significant changes to the process when an individual aged eighteen to twenty-one tries to purchase a firearm.

The Senate passed the bill sixty-five to thirty-three late Thursday night, with fifteen Republicans voting for the measure. All Democratic senators voted for the legislation. The Democrat-controlled House passed the measure on Friday morning, shortly before lawmakers were expected to depart for a two-week Fourth of July recess.

“Tonight, after twenty-eight years of inaction, bipartisan members of Congress came together to heed the call of families across the country and passed legislation to address the scourge of gun violence in our communities,” Biden said upon Senate passage of the legislation on Thursday.

“Families in Uvalde and Buffalo—and too many tragic shootings before—have demanded action. And tonight, we acted. This bipartisan legislation will help protect Americans. Kids in schools and communities will be safer because of it,” he continued.