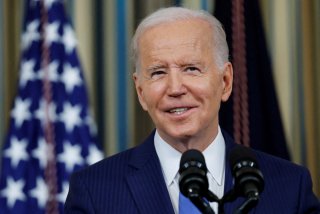 President Joe Biden said on Wednesday he is hopeful that the Kremlin will be willing to discuss the release of WNBA star Brittney Griner, who was transferred to a penal colony after pleading guilty to drug charges in a Russian court.

“My guess is—my hope is that now that the election is over, that Mr. Putin will be able to discuss with us and be willing to talk more seriously about a prisoner exchange," Biden said in a Wednesday news conference at the White House. "That is my intention. My intention is to get her home. And we've had a number of discussions so far. And I'm hopeful that now that our election is over, there is a willingness to negotiate more specifically with us."

Top Russian officials have previously tied Griner’s plight to the midterm elections in the United States. “In this tense situation, it seems to me that he [Biden] is thinking primarily about the upcoming midterm elections, which is why he keeps bringing up the need to return the basketball player who was detained for drug smuggling. However, it is not the main issue we are concerned about,” Kremlin aide Yury Ushakov said in an interview on Russian TV.

Secretary of State Antony Blinken has reportedly offered to swap convicted Russian arms dealer Viktor Bout for Griner and Paul Whelan, a former U.S. Marine serving a sixteen-year sentence in Russia on espionage charges. The Kremlin has so far given no outward signs that it is amenable to a prisoner exchange deal involving Griner.

White House Press Secretary Karine Jean-Pierre reiterated on Wednesday that the Biden administration made a “significant offer” to secure Griner’s release. “Despite a lack of good faith negotiation by the Russians, the U.S. government has continued to follow up on that offer and propose alternative potential ways forward with the Russians through all available channels,” she added. Moscow has continued to play its cards close to its vest, with Kremlin spokesman Dmitry Peskov telling reporters in late October that a potential prisoner swap involving Griner must be discussed behind closed doors.

Griner was sentenced in August to nine years of jail time on drug smuggling charges. A Russian court rejected the appeal of Griner’s sentence by her legal team last month. Her attorneys said on Wednesday that Griner was being transferred to a penal colony in an undisclosed location. "We do not have any information on her exact current location or her final destination," her lawyers said in a statement, according to NBC.