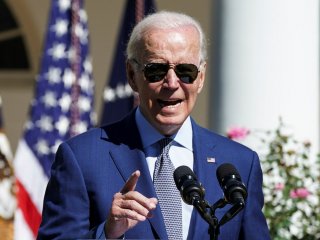 As the powerful Category 4 Hurricane Ian barreled toward southwest Florida on Wednesday afternoon, President Joe Biden warned oil and gas companies not to use the destructive storm as an excuse to hike gas prices, USA Today reported.

“Do not—let me repeat—do not use this as an excuse to raise gasoline prices or gouge the American people,” the president said in a speech at the White House.

“The price of oil has stayed relatively low and kept going down; the price of gas should be going down as well,” he continued.

Biden cited projections from White House experts that only 190,000 barrels of oil in the Gulf of Mexico have been impacted so far by Ian—accounting for only 2 percent of domestic daily production.

“This small, temporary storm impact on oil production provides no excuse for price increases at the pump,” he said.

If gas companies use Hurricane Ian to boost prices at the pump, Biden vowed to ask federal authorities to investigate whether price gouging is occurring.

“America's watching,” he said. “The industry should do the right thing.”

Meanwhile, the American Petroleum Institute, which represents the oil and gas industry, said that “gasoline prices are determined by market forces—not individual companies.”

“Claims that the price at the pump is anything but a function of supply and demand are false,” it continued.

According to AAA, gas prices trekked higher by a nickel over the past week, as the national average pump price settled at $3.72—fourteen cents less than a month ago but fifty-four cents more than a year ago.

“The main reason is higher regional prices on the West Coast and the Midwest due to refinery issues ranging from planned maintenance to a fire,” the site wrote. “But low domestic demand as fewer drivers fuel up and much lower oil prices have helped to blunt some of the impact.”

“Hurricane Ian could cause problems, depending on the storm’s track, by disrupting oil production in the Gulf of Mexico and impacting large coastal refineries,” he said.