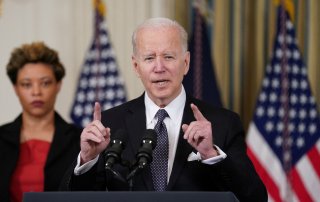 President Biden introduced his budget proposal for the coming year on Monday. According to a report from Bloomberg, the president will “broadly endorse” the "climate, social safety net and tax-code changes” that were part of the stalled Build Back Better framework. The document will include a “deficit-neutral reserve fund” as a placeholder.

Per the New York Times, the budget includes a proposal for a new tax on the very rich. The proposal, Politico said, “would require households worth more than $100 million to pay at least 20 percent in taxes on a combination of both their income and their unrealized gains in things like their stock portfolios.”

“This minimum tax would make sure the wealthiest Americans no longer pay a tax rate lower than teachers and firefighters,” the White House said of the proposed new tax, according to Politico.

The budget also includes military aid to Ukraine, money for crime prevention, and efforts to fight inflation and reduce the deficit. According to the Associated Press, the deficit has fallen dramatically as the pandemic recedes. The $3.1 trillion deficit from 2020 is projected to be cut by more than 50 percent, with the deficit this year predicted to come in at $1.4 trillion.

What Budgets Are Really For

One thing not often mentioned in media coverage is that when presidents announce their budget for the coming year, it is often meant as a political message rather than an actual proposal for the exact dollar amounts that will be spent by the government. In recent years, the federal government has largely been funded by continuing resolutions and other short-term agreements between the president and Congress.

In March of 2018, then-President Trump’s budget director, Mick Mulvaney, even described the president’s budget as a “messaging document.” This was also the case with the “Path to Prosperity,” the proposed budget document released by former Rep. Paul Ryan. Nothing resembling that budget ever became law, even during Ryan’s time as Speaker of the House.

“You try to use a budget to indicate how you’re moving forward in a negotiation to actually getting something done while also telling your base here’s what we truly believe,” Jason Furman, an economist at Harvard University who worked in the Obama White House, told the Times. “And the difficult thing is the challenge is always how to thread those two.”