Biden's Plan to Stop Nationwide Wave of Crime (Or Not?) 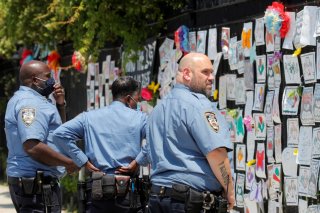 On Monday, President Joe Biden met with U.S. police chiefs and elected officials at the White House, where they discussed his plan to address the nationwide surge of gun violence. Among those in attendance was New York City Democratic mayoral nominee Eric Adams.

During the meeting, the president encouraged communities to use the $350 billion for states included in the Covid-19 relief plan that was passed by Congress in March to hire additional police officers, and to put in place new prevention programs.

The meeting was held as many large cities have seen a spike in gun violence over the past year, and Biden has sought to move the Democrats away from the "defund the police" messaging. According to an ABC/Washington Post poll released earlier this month, Biden's weakest areas in recent polling has been his handling of crime, with just thirty-eight percent of respondents approving of the job he's done – while forty-eight percent have disapproved.

"While there's no one-size-fit-all approach, we know there are some things that work," Biden said to reporters ahead of the meeting. "And the first of those that work is stemming the flow of firearms."

Last month, Biden called for additional efforts to be made to tackle gun violence by stemming the flow of illegal firearms, increase police hiring, and investing in community programs to expand summer and employment opportunities, while also helping formerly incarcerated people re-enter their communities.

Adams, who is currently Brooklyn Borough president and a former police caption, said after the meeting that he had asked President Biden to actually ensure that there is federal money available to invest in both the social programs as well as law enforcement, The New York Times reported.

"One thing I'm clear about: The prerequisite to prosperity is public safety and justice," Adams told the paper of record. "And if we don't have them both together, it doesn't matter how many police officers you put on the street. We can't continue to respond to symptoms. It's time to respond to the underlying causes of violence in our city."

The president has also cast much of the plan of the violence on guns, and he has already called upon Congress to pass measures that he claimed would close so-called "background check loopholes," restrict the sale of "assault weapons" and repeal gun manufacturers' immunity from lawsuits.

Biden has also sought to strengthen federal gun law enforcement, which would include the establishment of a new "zero-tolerance" policy for gun dealers who violate federal gun sales laws, while also delegating new power to the Bureau of Alcohol, Tobacco, Firearms, and Explosives (ATF). That could include the ability to revoke dealer licenses on first offenses, while also creating new "strike forces" led by the ATF to monitor and intercept firearm smuggling along several significant gun trafficking corridors between major cities.

Throughout his political career, Biden has largely positioned himself as a "tough-on-crime" lawmaker, and one of his prime legislative achievements as a United States senator had been the passage of the 1994 anti-crime law that increased police hiring, established stiffer sentencing for drug offenses, and even temporarily banned the sale of so-called assault weapons.

Moreover, as a presidential candidate, Biden distanced himself from the "defund the police movement." The president's greatest challenge in addressing the rise of crime may not come from Republicans but from those in the progressive wing of his own party, while the GOP has already made it clear that violent crime will be a central theme in their efforts to retake control of the House and Senate in the midterm elections next year.