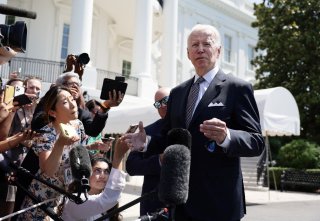 Amid sky-high gas prices hurting the pocketbooks of millions of inflation-weary Americans, President Joe Biden signaled on Monday that he would be open to a temporary pause in the 18.3-cent-per-gallon federal gasoline tax.

“I hope to have a decision based on the data I’m looking for by the end of the week,” Biden told reporters in Rehoboth Beach, Delaware.

The president added that he was weighing whether to support sending out gas-rebate cards to Americans.

However, per CNN, the White House has previously downplayed the prospect of sending out such rebate cards due to the fact that the massive program would be difficult to administer.

On Sunday, Energy Secretary Jennifer Granholm confirmed that a gas tax holiday is “one of the tools” available to the administration.

“It’s certainly one of the things the president is evaluating,” she said on CNN.

“I know this is what’s been happening in many states as well. Honestly, the whole array of tools are still being pressed. He’s used the biggest tool that he has, but he’s obviously very concerned about this continued upward pressure on prices,” she continued, adding that a major challenge to suspending the gas tax is that “it funds the roads.”

Meanwhile, Larry Summers, the former treasury secretary under President Bill Clinton, said on NBC’s “Meet the Press” over the weekend that he is “no fan of the gas tax holiday.”

“I think that’s kind of a gimmick, and eventually you have to reverse it,” he added.

“For most of this industry, we are price takers. We are not price makers in oil markets. What this means is, that we need to produce more in the United States to cut prices throughout the rest of the world,” he added.

“This administration needs to be focused on what we know is going to be true for decades and decades to come, that the world is going to continue to demand oil and gas … it’s better to get that oil and gas here in the United States than it is to get it from regimes that are hostile to American interests like Russia,” he continued.

For much of the past two weeks, a gallon of regular gas has hovered around $5 on average nationwide, according to AAA data. On Tuesday, a gallon of gas fell slightly to $4.96.

“The recent high prices may have led to a small drop in domestic gasoline demand as fewer drivers fueled up last week,” Andrew Gross, AAA spokesperson, said in a statement. “This dip, coupled with less costly oil, has taken some steam out of surging pump prices. And this is happening right before drivers gas up for what AAA forecasts will be a busy July 4th travel weekend.”