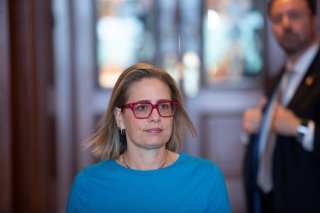 On Thursday, Sen. Kyrsten Sinema (D-AZ) confirmed that she will sign off on a revised version of the Inflation Reduction Act, opening the door for lawmakers to adopt the long-stalled legislation as soon as this Saturday, according to a new Washington Post report.

Sinema offered her support after Democratic leaders agreed to scale back some of their original tax proposals, including closing the so-called carried interest tax loophole, a longstanding tax break that enables many private equity and hedge fund financiers to pay a lower capital gains tax rate on much of their income instead of the higher income tax rate paid by wage earners.

“We have agreed to remove the carried interest tax provision, protect advanced manufacturing, and boost our clean energy economy in the Senate’s budget reconciliation legislation,” Sinema said in a statement. “Subject to the Parliamentarian’s review, I’ll move forward,” she continued.

The centrist Democrat added that she would work separately “to enact carried interest tax reforms, protecting investments in America’s economy and encouraging continued growth while closing the most egregious loopholes that some abuse to avoid paying taxes.”

NBC News reported that a Democrat familiar with the new agreement said the bill will contain “a new excise tax on stock buybacks that brings in far more revenue than the carried interest provision did.”

It was not immediately clear what other changes Sinema was able to secure, but Senate Majority Leader Chuck Schumer (D-NY) said that “the major components” of the original bill are still there, which include “reducing prescription drug costs, fighting climate change, closing tax loopholes exploited by big corporations and the wealthy, and reducing the deficit by $300 billion.”

With all fifty senators now seemingly on board, Schumer expressed confidence that the bill will pass this weekend.

“I am pleased to report that we have reached an agreement on the Inflation Reduction Act that I believe will receive the support of the entire Senate Democratic conference,” Schumer noted in a statement. “The final version of the Reconciliation bill, to be introduced on Saturday, will reflect this work and put us one step closer to enacting this historic legislation into law,” he added.

In assessing the latest development, President Joe Biden applauded the lawmakers for taking “another critical step toward reducing inflation and the cost of living for America’s families.”

“The Inflation Reduction Act will help Americans save money on prescription drugs, health premiums, and much more. It will make our tax system more fair by making corporations pay a minimum tax. It will not raise taxes on those making less than $400,000, and it will reduce the deficit. It also makes the largest investment in history in combatting climate change and increasing energy security, creating jobs here in the U.S. and saving people money on their energy costs. I look forward to the Senate taking up this legislation and passing it as soon as possible,” he continued.