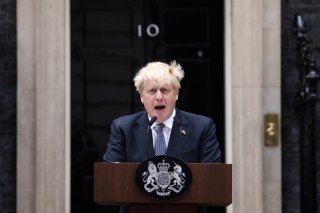 Embattled British prime minister Boris Johnson announced his resignation on Thursday, but said that he would continue to serve in his post until his party selects a new leader.

“In the past few weeks, I have been trying to convince my colleagues it would be eccentric to change governments when we have achieved so much,” Johnson said in a speech outside No. 10 Downing Street, according to NBC News.

“I regret not to be successful in those arguments and, of course, it’s painful not to be able to see through those projects myself,” he said, later hailing his government's achievements, such as supporting Ukraine after Russia’s invasion and weathering the yearslong Covid-19 pandemic.

With the announcement, Johnson becomes the third consecutive British prime minister to step down before their term ended, following in the footsteps of Theresa May and David Cameron.

Soon after his speech, calls came for Johnson to leave Downing Street immediately. “For the overall wellbeing of the country, Mr. Johnson should not remain in Downing Street,” former Prime Minister John Major wrote in a letter.

Meanwhile, Labour Party leader Keir Starmer told Sky News that Johnson “needs to go completely.”  “None of this nonsense about clinging on for a few months. He inflicted lies, fraud and chaos in the country. We are stuck with a government which isn’t functioning in the middle of the cost-of-living crisis,” he added.

Johnson was ultimately forced to resign not over policy or political differences, but because of months of discontent over his judgment and ethics. He survived a vote of confidence by his party last month in which 41 percent of its lawmakers voted to sack him. That followed the “partygate” scandal, in which Johnson was fined by police and criticized by an investigator’s report over lockdown-breaching parties he and his aides held during the pandemic.

The scandal that ultimately ended Johnson’s nearly three-year premiership was caused by his decision to promote lawmaker Chris Pincher to a position of power even though he knew Pincher had been the subject of a sexual misconduct complaint. Calls for Johnson’s resignation only strengthened in the hours that followed, during which more than fifty other members of the government stepped down.

“Yesterday, I made clear to the Prime Minister alongside my colleagues in No. 10 that there was only one direction where this was going, and that he should leave with dignity,” newly appointed Chancellor Nadhim Zahawi wrote in an open letter published on Twitter early Thursday.

“I am heartbroken that he hasn’t listened and that he is now undermining the incredible achievements of this government at this late hour,” he added.

A timetable to choose Johnson’s replacement is expected to be announced next week. British prime ministers are not directly elected by voters and are instead chosen by the winning party.