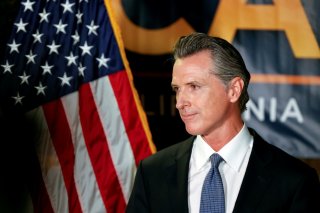 A new California law signed this past weekend by Gov. Gavin Newsom will assist military service members who were discharged under “Don’t Ask, Don’t Tell” policies to reestablish their eligibility for Veterans Affairs benefits, according to an Associated Press report.

“For decades, our bravest heroes, men and women who wore the uniforms of the armed services had to hide who they really were, and many were other than honorably discharged if their sexuality was discovered,” Newsom, the Democratic governor who may be eyeing the White House in 2024, said in a statement after announcing he had signed the legislation.

Gays and lesbians were barred from entering the military until the 1993 approval of “Don’t Ask, Don’t Tell,” which allowed them to serve only if they did not openly acknowledge their sexual orientation. In its entire history, the military dismissed more than 100,000 service members based on their sexual or gender identities. Per The Hill, more than 13,000 service members were discharged for violating the “Don’t Ask, Don’t Tell” policy, according to the Williams Institute, a public policy think tank.

In late 2010, repeal of the controversial law was approved by Congress and then-President Barack Obama. It took effect nine months later.

“While the repeal of ‘Don’t Ask, Don’t Tell’ ended a shameful injustice against LGBTQ Americans serving in our armed forces, its legacy continues to burden the women and men unfairly ousted under the discriminatory policy,” Newsom said in a release.

“With this legislation, the state will help these heroes navigate the process to correct the record and access important benefits they deserve and have earned many times over. I thank Assemblymember Irwin for advancing this measure to do right by our veterans and further California’s commitment to equality,” he continued.

After the repeal, the Department of Defense created a path for veterans who had been discharged under the policy to receive all of the veterans’ benefits that they are entitled to.

“But many veterans sadly don’t know or can’t even access this important process. We’re taking steps to fix this,” said Newsom, who added that some veterans trying to reclaim benefits have had to hire expensive legal counsel and other assistance to navigate the complex process.