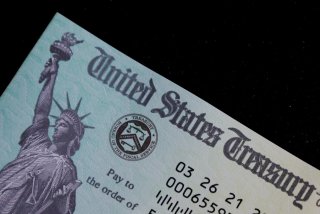 A mother from Modesto, California, is facing close to twenty years in prison after pleading guilty to conspiring with her son to file fraudulent stimulus checks that totaled nearly $150,000.

As reported by KTVU in the San Francisco Bay Area, Sheila Denise Dunlap admitted late last week that she and her son, who is on death row at San Quentin, were able to garner the personal information of more than 9,000 individuals to apply for federal government-issued stimulus payments in 2020.

Dunlap’s son—identified only by the initials D.W.—sent her the personal information of his fellow prisoners along with information of other inmates whom they suspected might qualify as non-filers for their 2018 or 2019 tax returns.

In all, investigators confirmed that Dunlap used her own bank account information to receive more than $145,000 via the stimulus checks.

The fifty-one-year-old was charged by a federal indictment last May with engaging in a wire fraud conspiracy to file dozens of fraudulent applications for the economic impact payments (EIP). The EIP program was part of the CARES Act, which was signed into law in March 2020 to address the economic impacts of the ongoing coronavirus pandemic. Eligible households at the time received as much as $1,200 per adult and $500 for a qualifying child.

Dunlap is scheduled for her sentencing hearing on June 24.

It appears that the Internal Revenue Service has long been aware of such scams involving stimulus checks and tax refunds. In response, the agency has put out warnings to Americans during this tax season.

“With filing season underway, this is a prime period for identity thieves to hit people with realistic-looking emails and texts about their tax returns and refunds,” IRS Commissioner Chuck Rettig said in a statement.

“Watching out for these common scams can keep people from becoming victims of identity theft and protect their sensitive personal information that can be used to file tax returns and steal refunds,” he added.

There also have been plenty of reports of individuals receiving emails or text messages that look to be from the IRS about government-issued stimulus payments or unemployment claims.

“Thousands of people have lost millions of dollars and their personal information to tax scams. Scammers use the regular mail, telephone, or email to set up individuals, businesses, payroll and tax professionals,” the IRS says on its website.

“The IRS doesn’t initiate contact with taxpayers by email, text messages or social media channels to request personal or financial information,” it continues.

The agency added that “last year, there was an uptick in text messages that impersonated the IRS” and that “these scams are sent to taxpayers' smartphones and have referenced COVID-19 and/or ‘stimulus payments.’”