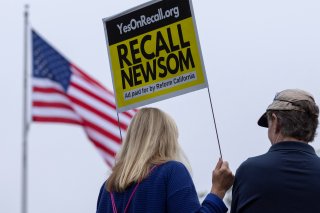 California’s 2021 recall election is set to take place in less than a month on September 14. While the election was initially dismissed as a publicity stunt by the state’s Republican minority, and support for the recall floundered in the polls, it has since turned into a real contest. Polls in California, a heavily liberal and Democratic state, have remained surprisingly close between supporters and opponents of the recall. In a recent SurveyUSA poll, a shocking 51 percent of state residents indicated they would not vote for Newsom while 40 percent of the residents indicated they would vote to keep him. This result surprised many observers, who noted that Newsom had handily won his 2018 race for governor with 61.9 percent of the vote.

There are forty-six candidates listed on the ballot to replace Newsom. Among these, the frontrunner is conservative radio and television host Larry Elder, who has so far raised more than $4.5 million in campaign contributions. Other major conservative candidates include Kevin Faulconer, the moderate Republican mayor of San Diego; John Cox, a businessman who ran against Newsom as the Republican nominee for governor in 2018; and Caitlyn Jenner, a celebrity and media personality.

While a handful of minor Democrats have independently filed to run—most prominently YouTube personality Kevin Paffrath—the state’s Democrats have instead thrown their weight behind Newsom, pushing their supporters to vote down the recall and not choose an alternative candidate. Democrats across the country have also rallied to Newsom’s support, with President Joe Biden voicing his support for Newsom and Sen. Elizabeth Warren (D-Mass.) running television advertisements on his behalf in the state.

The recall election has two parts. The first part asks voters whether they would like to recall Newsom or not; the second part asks who they would like to replace him. If a majority of voters decide to recall Newsom on the first question, then the candidate with the most votes on the second question replaces him as governor. The system is first-past-the-post and there are more than forty total candidates, which means it would technically be possible for Newsom’s successor to be elected with less than three percent of the vote—a fact that has raised eyebrows in Sacramento and elsewhere in the United States.

The last governor of California to be recalled was Gray Davis, a Democrat, in 2003. Davis, who was widely unpopular in the state for implementing a gasoline tax, was replaced by actor Arnold Schwarzenegger, who served from 2003 until 2011 and remains the last Republican governor of the state.

The recall election is set to cost the state of California roughly $276 million to run.