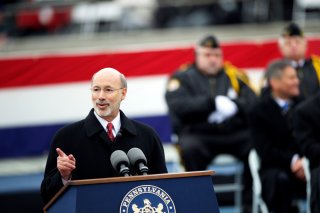 Over the course of the long, economically crippling pandemic, Congress has stepped in to provide three much-needed direct stimulus payments to most Americans.

But ever since the American Rescue Plan last spring green-lighted the most recent third stimulus check, there has been no further concrete action on the part of the Biden administration and Congress. With this in mind, it appears that the best hope cash-strapped Americans have for more stimulus funds is their respective state and local governments.

As reported by BGR, there are now signs that residents of Pennsylvania might eventually be on the receiving end of some timely cash, just as inflation has surged to a four-decade high of 8.5 percent. If Gov. Tom Wolf has his way, there will be direct payments of up to $2,000 for state residents with an income of $80,000 or less.

“The cost of everything from gas to groceries is rising, and for Pennsylvanians living paycheck to paycheck that can mean painful decisions,” Wolf stated in a news release.

“Pennsylvanians deserve to be supported and the opportunity to thrive. Yet my Republican colleagues are sitting on more than $2 billion of support that will need to be returned to the federal government if they don’t pass a plan,” Wolf continued.

The direct payments are a part of Wolf’s $1.7 billion budget proposal, which also includes $225 million in support for small businesses, $204 million for direct property tax relief, and $325 million for the state’s healthcare system.

Other States Stepping Up

Like Pennsylvania, several other states have proposed their own stimulus checks to combat red-hot inflation. The most notable example can be seen in California, where Gov. Gavin Newsom and most state Democrats are pushing for a $400 tax refund in the form of a debit card. “That direct relief will address the issue that we all are struggling to address, and that’s the issue of gas prices,” the governor stated in a Twitter video.

According to Newsom’s office, the refunds would include $400 for each registered vehicle, up to two, that a state resident owns. That means that eligible individuals could potentially receive up to $800 in total from the state to help offset sky-high gas prices. Newsom has also proposed offering major grants—up to $750 million—to make public transit free to the public for up to three months.

“With a historic surplus, we have an opportunity to provide direct relief to Minnesotans and invest in the future of our state,” Walz said in a statement. “Amid global economic uncertainty, direct payments are one of the best ways to make it easier for Minnesotans to pay their bills. Right now, we have the resources to send $1,000 to Minnesota families,” he continued.