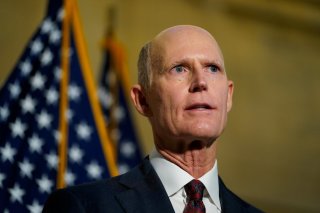 Earlier this spring, Sen. Rick Scott (R-FL), the chairman of the Republican Senatorial Campaign Committee, released an agenda called the 11 Point Plan to Rescue America. Meant as a policy document to guide the party in the midterm elections, the plan has been controversial, with Sen. Mitch McConnell, the Senate Minority Leader, publicly expressing skepticism about its contents.

Critics of the Scott plan have zeroed in on its implications for Social Security. While it does it specifically threaten to cut off funding for the program, the Rescue America document calls to “force Congress to issue a report every year telling the public what they plan to do when Social Security and Medicare go bankrupt,” and also calls for “no government assistance unless you are disabled or aggressively seeking work.”

Democrats have interpreted this to mean the end of Social Security, although fact-checkers have pushed back against that interpretation.

Now, Democrats have commissioned a poll, meant to test messages that can be used ahead of the midterm elections this fall. The polling suggests that acting as guardians of Social Security and Medicare could be the Democrats’ best bet this fall.

The poll comes from Blue Rose Research and is titled “DSCC Message Test On the Senate Republican Agenda.” It was commissioned by the Democratic Senatorial Campaign Committee and released publicly.

“This research shows that the Senate Republican agenda is opposed by a wide range of voters, including Trump voters – and Democrats have effective messages against it, especially on Medicare and Social Security, taxes, and health care,” the poll summary said.

It also listed a potential ad that can be used against Republican candidates.

“CANDIDATE is standing up against Senate Republicans’ new plan that would end all federal programs in 5 years – including Medicare, Medicaid, and Social Security. CANDIDATE believes we must fight to protect these programs because they help seniors and working families, not end them.”

The message, the polling summary said, is “in the top 5% most effective of all Senate messages tested by Blue Rose Research to date.”

It’s important to note that these aren’t “polls” in the traditional sense, in which an impartial pollster takes the temperature of the electorate. This poll was taken on behalf of the Democratic Senate election effort, for the purpose of getting Democrats elected.

At any rate, the Democrats are looking at strong headwinds going into the fall campaign, with the incumbent president’s party traditionally losing seats in midterms, and the president suffering from low approval ratings. The generic ballot, however, is split.