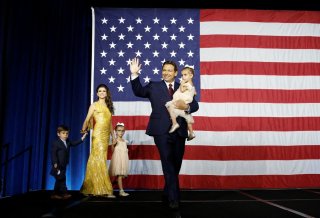 At his victory party in Tampa, DeSantis, the first GOP governor to win the Democratic stronghold Miami-Dade County since Jeb Bush’s re-election in 2002, called it “a win for the ages.”

“We not only won election, we have rewritten the political map,” he continued.

One Florida-based Democratic consultant told Axios that he has “never seen a race that big in my history of working in Florida politics—that’s an absolute bloodbath.”

DeSantis’ resounding win surely enhances his profile among Republicans and sets up a potential rivalry with former President Donald Trump, who is widely expected to announce his 2024 intentions next week.

Trump, who told reporters on Tuesday that he voted for DeSantis, has already gone on the offensive, calling the Republican governor “Ron DeSanctimonious” at a recent rally.

“I would tell you things about him that won’t be very flattering—I know more about him than anybody—other than, perhaps, his wife,” he added.

Trump later described his potential opponent as “a fine guy” and denied any ongoing conflict. “There’s not a tiff with me, and I’m way up in the polls,” he said.

Meanwhile, GOP mega-donor Ken Griffin told Politico earlier this week that he would back DeSantis if he decides to run for president.

“I don’t know what he’s going to do. It’s a huge personal decision,” he said of DeSantis. “He has a tremendous record as governor of Florida, and our country would be well-served by him as president.”

As for Trump, “he did a lot of things really well and missed the mark on some important areas. And for a litany of reasons, I think it’s time to move on to the next generation,” he concluded.

Other notable Republican figures have been skeptical of Trump’s path back to the nation’s highest office.

“I think Trump’s un-electability will be palpable by then,” former Speaker Paul Ryan (R-WI) said last month of the former president’s 2024 prospects.

“We all know he will lose. Or let me put it this way: We all know he’s much more likely to lose the White House than anybody else running for president on our side of the aisle. So why would we want to go with that?”