Does Anyone Care Anymore About the National Debt and Budget Deficit? 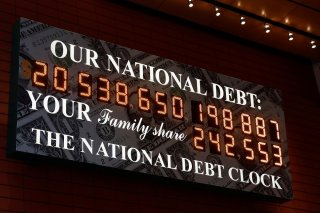 According to usdebtclock.org, the U.S. national debt is nearly $30 trillion, while the current U.S. budget deficit is $2.8 trillion. The latter number was the listed figure by the Treasury Department last October, per The Hill, which was described as the second-largest deficit in history. The budget deficit in 2020, during the depths of the pandemic, was $3.1 trillion. The previous record had been $1.4 trillion, set during the Great Recession in 2009.

That was the first year of the Obama Administration, and arguments about deficits and debt were a major part of political opposition to Barack Obama. Rising debts was a huge part of the case the Republican opposition made against Obama both before and after the Republicans captured control of the House in the 2010 midterms and the Senate in 2014.

This helped bring about the Tea Party movement in 2009 and later standoffs between the president and Congress over the debt limit and sequestration. Even the Obama administration was talking about “tightening our belts.”

But since Obama left office, the issue has largely receded even as the deficits and debts themselves have risen. Donald Trump promised during his 2016 campaign to eliminate the deficit in eight years, but did nothing close to that as President. The debt rose by billions during his term even before the pandemic began.

Perhaps more notably, Trump rarely spoke as president about such issues. After eight years in which the deficit was a lynchpin of Republican opposition to a Democratic president, it wasn’t one of Trump’s main issues, nor something that animated his supporters. When Trump instigated a government shutdown in 2018, it was about immigration policy and funding of his southern border wall, not the debt.

With President Joe Biden in office, many expected the deficit politics of the Obama era to resume. But that mostly hasn’t happened. Republicans have sometimes invoked worries about spending in opposing the president’s major legislative packages, but it’s been far from the main force driving Republican opposition to the Biden administration.

Pandemic measures, inflation, and various culture war issues have been much bigger issues for the GOP in the Biden era so far, although that could change if Republicans take over either house of Congress in this year’s midterm elections and it leads to budget battles that resemble those of the Obama years.