Does Hunter Biden Have a Tax Problem? 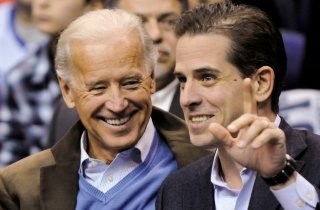 Hunter Biden, the son of presumptive President-elect Joe Biden, announced Wednesday that the U.S. Attorney’s Office in Delaware was investigating his taxes, a matter that he takes “very seriously,” ensuring that he handles his legal affairs “legally and appropriately.”

“I learned yesterday for the first time that the U.S. Attorney’s Office in Delaware advised my legal counsel, also yesterday, that they are investigating my tax affairs,” Hunter Biden said in a statement. “I take this matter very seriously but I am confident that a professional and objective review of these matters will demonstrate that I handled my affairs legally and appropriately, including with the benefit of professional tax advisors.”

Joe Biden’s transition team released a separate statement, noting “President-elect Biden is deeply proud of his son, who has fought through difficult challenges, including the vicious personal attacks of recent months, only to emerge stronger.”

The Biden-Harris transition team provided no further information regarding the tax case. Federal officials involved in the investigation in Delaware have not released a statement.

The investigation, according to Fox News, began two years ago.

The tax case comes just weeks after a swirl of legal action that bombarded the president-elect’s son, as President Donald Trump and close allies on Capitol Hill sparked claims that Hunter allegedly made foreign business deals when he served on the board of a Ukrainian energy company, while his father served as vice president under President Barack Obama’s administration. The allegations say that Joe Biden used his influence and political power to accelerate the deals and gain financially.

In an interview with ABC News last year, Hunter Biden emphasized that he used “poor judgment” when taking the job due to his father’s role in the White House but said he didn’t do anything illegal or inappropriate during his time in the position

NBC News reported that Hunter Biden and his ex-wife Kathleen Buhle did owe the Internal Revenue Service unpaid taxes that amounted to $112,805.09 until March, but it’s unclear if the IRS findings relate to the recent investigation. Hunter and Buhle reportedly received the IRS charge in November of 2019, according to the network.

The Bidens will likely face public backlash from the revelations, especially from Trump and his allies.