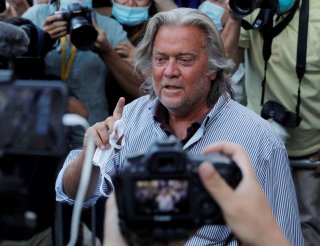 A month ago, President Donald Trump lashed out on Twitter about a 3-mile section of border wall built by a private company.

On Thursday, after former campaign and White House adviser Steve Bannon was indicted for fraud for his role in the privately funded wall project, Trump offered little sympathy.

He said he thought Bannon’s project was “showboating.”

He was arrested for allegedly ripping off donors to the “We Build the Wall” campaign in a case brought by federal prosecutors in the Southern District of New York.

Asked by reporters Thursday about news of Bannon’s indictment by the Justice Department for fraud in raising private funds to build a section of wall, Trump noted that Bannon has a lot of affiliations.

“He worked for Goldman Sachs, he worked for a lot of companies. But he was involved likewise in our campaign, and [was] part of the administration early, early on. I haven’t been dealing with him at all,” Trump said at the White House.

“I know nothing about the project other than I didn’t like it when I read about it. I didn’t like it. I said, ‘This is for government [to oversee]. This isn’t for private people,” Trump said, adding:

It sounded to me like showboating. I think I let my opinion be very strongly stated at the time. I didn’t like it. It was showboating and maybe looking for funds. You’ll have to see what happens. I think it’s a very sad thing for Mr. Bannon. I think it’s very surprising.

The president added: “I didn’t know he was in charge. I didn’t know any of the other people, either. It’s sad. It’s very sad.”

Building an extended border wall was a key part of Trump’s 2016 campaign for president. In early 2019, he declared a national emergency to use federal funds for the wall construction.

Bannon, who left his executive role at Breitbart News in 2016 to help run the Trump campaign, was credited—along with veteran Republican political operative Kellyanne Conway—with helping steer Trump to victory.

Both Bannon and Conway got White House jobs, but Trump fired Bannon after just seven months over suspicions that he was a leaker to reporters.

After the parting, Trump would refer to Bannon as “Sloppy Steve.”

Bannon, however, continued being a fierce defender of Trump in the media.

The other two men indicted by the Justice Department were identified as Andrew Badolato and Timothy Shea.

The ProPublica-Texas Tribune first reported in July that a 3-mile section of the group’s wall in the Rio Grande Valley had severe structural problems.

“President Trump has always felt the wall must be a government project and that it is far too big and complex to be handled privately,” McEnany said in the statement, adding:

The Trump Administration has already built over 300 miles of Border Wall, thanks to the great work of our Army Corps of Engineers, and will have almost 500 miles completed by the end of the year.  Our southern border is more secure than it has ever been.

President Trump has not been involved with Steve Bannon since the campaign and the early part of the Administration, and he does not know the people involved with this project.

This article by Fred Lucas first appeared in the Daily Signal in 2020.