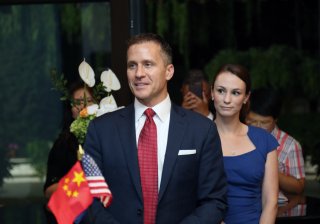 In what's quickly become the most notorious political ad of the year, Missouri Republican Senate candidate Eric Greitens released an advertisement on Tuesday that appeared to condone violence against political opponents.

Greitens, a former Missouri governor, debuted the thirty-eight-second ad online. In the ad, Greitens totes a shotgun and participates in what looks like a raid on a house with a tactical team. “Today, we’re going RINO-hunting,” he says, referring to a popular acronym for “Republican in Name Only.”

“Join the MAGA crew, get a RINO-hunting permit,” Greitens says. “There’s no bagging limit, no tagging limit, it doesn’t expire until we save our country.”

Political ads featuring a candidate brandishing or even shooting guns are far from rare. Sen. Joe Manchin famously ran an ad in which he shot at pieces of legislation. But the Greitens ad goes even further, more closely approaching direct calls for violence.

The ad has been roundly denounced by members of both parties. Rep. Joaquin Castro (D-TX) called it “sociopathic,” while Rep. Adam Kinzinger (R-IL) called Greitens “a very bad man.” The ad was pulled from Facebook for violating the company’s policies around violence and abuse, while Twitter placed a warning on it without removing it altogether. This led to predictable accusations of social media censorship from Greitens.

Others have noted that the ad represents a mixed metaphor. Greitens refers to “the RINO” as if he were on a nature show and otherwise uses the “hunting” metaphor. However, he is shown raiding a house, where animals wouldn’t be. Also, the candidate is wearing a collared shirt rather than appearing in uniform alongside the soldiers.

But there’s another aspect of the ad that’s worth noting, as pointed out by Philip Klein of the National Review. In the ad, Greitens refers to himself both out loud and on-screen, as a “Navy Seal.”

Greitens was a Navy Seal. After he resigned the governorship of Missouri amid accusations of domestic violence, he sought to re-enter the Navy, and per an Associated Press report in 2020, the Navy had been reluctant to reinstate him before the office of then-Vice President Mike Pence personally intervened. A spokesman for Pence, however, denied that this had happened. Greitens was ultimately reinstated to the Navy, but not to the Seals.

Greitens was indicted in 2018 on a pair of charges, one for invasion of privacy in connection with a compromising photo of a woman he had taken, and the other for campaign finance violations. Both charges were eventually dropped, although Greitens’ former wife came forward earlier this year with new charges of domestic abuse. Greitens has denied any wrongdoing.