Even School Cafeterias Are Feeling the Pain of Inflation 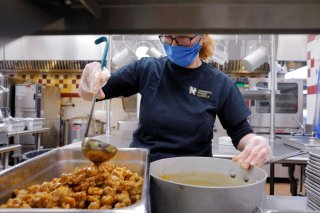 School cafeterias are the newest victims of supply chain disruptions and sky-high inflation.

Per CBS News, some school districts have been forced to pull back or make substitutions on meals to deal with the spiraling cost of key ingredients.

For example, at Meade Middle School in Maryland, the cafeteria now only offers only one entrée a day, which is down from the five that they generally have available. The cafeteria is also running out of condiments.

“We had no more condiments like ketchup and mustard and the ranch, which I loved,” Elijah Lee, an eighth-grader at the school, told the news outlet.

At some of the schools, there are no more hamburgers or chicken patty sandwiches due to high bun prices. Instead, they are offering more tacos or other bun-less options.

“Our students are very savvy. They know what they eat, what they want,” Jodi Risse, food and nutrition services supervisor for Anne Arundel County Public Schools, told CBS.

Even trays and plates are in short supply. “Plates became unavailable,” Risse continued. “We had to call those manufacturers and then develop those relationships to say, ‘How do we best get the trays we need to service our students?’”

She added that “we are going to have to raise prices this school term, just enough to cover the food cost and not put too much of a burden on the parents that are having to pay.”

English noted that the financial burden could last for another quarter or two.

“We've been adjusting and trying to do as much as we can with our commodities and that kind of stuff to make the hit just a little less, but it is something we have to do as a district,” she said.

The cafeteria at Lonoke School District in Arkansas is also having to make similar changes, according to child nutrition director Elen Smith.

“Anytime you have prices going up on food in the grocery stores, it's gonna go up for everybody,” she said.

“It's just the way of it all right now,” she added.

According to the Detroit Free Press, the monthly price increase for meats, poultry, fish, and eggs was up 1.4 percent from March and up more than 14 percent compared to a year ago—the biggest jump since May 1979. Meanwhile, fruits and vegetables rose at a nearly 8 percent clip year-over-year.