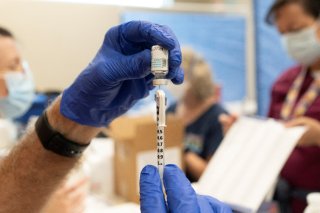 Global health experts are cautiously optimistic that the monkeypox outbreak may be peaking in some of the hardest hit regions of the world, the Associated Press has reported.

On Thursday, the World Health Organization (WHO), which declared the global spread of the virus to be an international emergency in July, confirmed that the number of monkeypox cases reported worldwide declined by 21 percent within the past week, reversing a monthlong trend of rising infections. The Americas accounted for 60 percent of cases over the past month, while Europe comprised 38 percent.

Roughly three months into the global outbreak, there are currently more than 47,000 cases across ninety-nine countries, according to the latest data compiled by the Centers for Disease Control and Prevention (CDC). Here in the United States, there are 17,000 monkeypox infections across all fifty states.

Last week, British health authorities noted that there were “early signs” that the country’s monkeypox outbreak was slowing. However, during a press briefing on Thursday, WHO director-general Tedros Adhanom Ghebreyesus cautioned that the spread of the virus was now causing concerns elsewhere—not just in Europe and North America.

“In Latin America in particular, insufficient awareness or public health measures are combining with a lack of access to vaccines to fan the flames of the outbreak,” Tedros said.

Meanwhile, Reuters reported that Dr. Gerardo Chowell, an infectious disease modeler at Georgia State University School of Public Health, said that his latest model forecasts a continued slowdown in new monkeypox infections in the United States over the next month.

“It’s very likely that the epidemic peaked as of last week,” he said, adding that the future declines may not be enough to completely extinguish the outbreak but should bring infection numbers to “very low levels.”

Last week, the Biden administration announced new steps to accelerate the country’s response to the outbreak, with health officials aiming to boost the nation’s vaccine supply with an additional 1.8 million doses of the Jynneos monkeypox vaccine.

Officials are also providing more resources to local jurisdictions to help transition to a new type of injection to stretch out vaccine supply. Earlier this month, the U.S. Food and Drug Administration (FDA) issued an emergency use authorization that gives the green light to healthcare providers to split vaccine doses in hopes of inoculating up to five times as many people against the disease. Vaccine doses can now be offered to high-risk adults intradermally, or between the layers of the skin, rather than subcutaneously, or under the skin, as it has been typically administered. This will enable providers to get up to five doses out of a standard one-dose vial.