Experts: Now Is the Time to Invoke the 25 Amendment on Trump 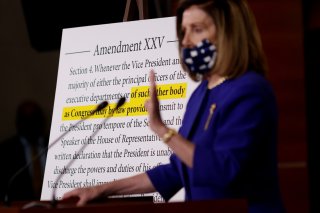 After a violent, deadly mob tackled through the U.S. Capitol on Wednesday, disrupting the electoral college certification to affirm President-elect Joe Biden’s victory, several lawmakers joined in an effort to remove President Donald Trump from office through the 25th Amendment.

There have also been talks among members of Trump’s cabinet and close allies over invoking the amendment, according to ABC News, but it’s unclear how serious the discussions are.

But as calls grew to remove the president from the White House before inauguration day, Trump said he was “outraged by the violence, lawlessness and mayhem” on the Capitol this week and promised a smooth transition in a video message released Thursday night, urging that although his campaign pursued all legal avenues to ensure a safe and fair election, “now tempers must be cooled and calm restored.”

Senate Democratic Leader Chuck Schumer (D-N.Y.) released a statement earlier on Thursday condemning Trump, noting that Wednesday’s events were “an insurrection against the United States, incited by the president.” He continued, “This president should not hold office one day longer.”

“The quickest and most effective way—it can be done today—to remove this president from office would be for the vice president to immediately invoke the 25th Amendment,” Schumer said. “If the vice president and the Cabinet refuse to stand up, Congress should reconvene to impeach the president.”

“I join the Senate Democratic leader in calling on the Vice President to remove this President by immediately invoking the 25th Amendment,” Pelosi said. “If the vice president and the Cabinet do not act, the Congress may be prepared to move forward with impeachment. That is the overwhelming sentiment of my caucus, and the American people, by the way.”

The 25th Amendment of the Constitution, which was ratified in 1967 after the assassination of President John F. Kennedy in 1963, sets the groundwork for transferring presidential powers from president to vice president in event of death, removal, resignation or incapacitation.

While Democrats have mainly pushed for Trump’s removal from office, one House Republican united with the effort.

Rep. Adam Kinzinger (R-Ill.) urged that the 25th Amendment be invoked in a video message released Thursday, saying that “the president must now relinquish control of the executive branch voluntarily or involuntarily.”

The recent calls from both sides of the aisle highlight the fear and rage aimed at Trump and his mob-like supporters who ravaged through the Capitol based on baseless claims of voter fraud in 2020 presidential election results.

“The most immediate way to ensure the President is prevented from causing further harm in coming days is to invoke the 25th Amendment and remove him from office. As history watches, I urge Vice President Pence and the President’s cabinet to put country before party and act,” she said in a statement.

Sen. Chris Coons (D-Del.) echoed his colleagues’ push: “If we’re not going to use the 25th Amendment in this moment then I'm not clear what it’s really for,” he told “GMA3: What You Need to Know” on Thursday.

“It should be abundantly clear to leaders in the Republican Party that this president, who they have made excuses for, who they've coddled . . . the way that he has conducted himself has slowly and gradually built to what happened yesterday,” Coons said. “Removing Donald Trump as president is urgent.”

Rep. Charlie Crist (D-Fla.) also called on Pence to use the 25th Amendment to remove Trump from office, as he is “mentally unfit to continue as commander-in-chief.”

The amendment offers the president a four-day window to object to the initiative, which Congress reviews by conducting a vote.

Another section of the amendment permits a president to voluntarily transfer power to the vice president, which could be due to a medical procedure or surgery. President Ronald Reagan used this in 1985, along with President George W. Bush in 2002.

Although there are less than two weeks until Biden swipes the White House, experts said that the 25th Amendment should be invoked.

“Our laws and the Constitution itself depend on a belief that those who violate them will be punished. Many lawmakers have condemned the president’s role in inciting the attack on the Capitol. If they do not follow up their words with real enforcement—removing the president from office—then they tell Americans that these laws do not matter,” Jenna Bednar, political science professor at the University of Michigan, said.

Bednar added, “There may be those who say why bother removing the president when only thirteen days remain in his term. The reason is fundamental: it is to reassure the American people that the Constitution matters.”

Amel Ahmed, associate professor of political science at the University of Massachusetts Amherst, slightly echoed Bednar’s remarks, noting that the amendment serves to “prevent harm in the future,” as it “depends on an assessment of whether or not allowing the President to continue in office will expose the nation or its institutions to danger.”

“Since the president has declined to repudiate those who attacked the Capitol and has even expressed sympathy for them, it is reasonable to conclude—and I am sure his supporters have concluded—that he approves of these actions and would wish to see more,” Ahmed said. “So, yes, I think use of the 25th Amendment is appropriate in this case. Of course, he would be able to continue to incite violence, but he would not be able to do it with the legitimacy of the office of the Presidency.”

Lawmakers argued that Trump incited the violence that struck the Capitol on Wednesday, as he told a crowd of supporters earlier in the day, “If you don’t fight like hell, you’re not going to have a country anymore.” After four people died and offices in the building were vandalized, Trump finally told his mob-like supporters to go home, though proceeded to boast the claims of a “fraudulent election” that was “stolen.”

“The fact that it was Pence who activated the National Guard yesterday tells us that he does not have confidence that the President can execute his duties,” Ahmed said. “In a sense, the 25th Amendment has already been invoked.”

Other congressional Democrats have circulated articles of impeachment against the president on Thursday, including Reps. David Cicilline (R.I.), Ted Lieu (Calif.) and Jamie Raskin (Md.).

“Regarding whether it should be by the 25th or impeachment: a simultaneous invocation of both the 25th Amendment by the Cabinet and impeachment by Congress would send an unmistakable, emphatic reassurance to Americans and the world that American democracy lives on,” Bednar said.