The Expiration of Enhanced Unemployment Has Not Led to More Applications 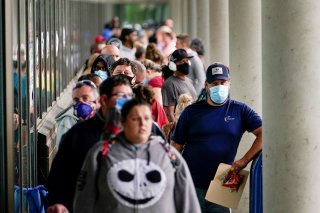 For months, the United States has suffered a labor shortage, and much of the conventional wisdom has stated that the enhanced unemployment benefits were the reason for that shortage. The expanded benefits, which were signed into law as part of the American Rescue Plan Act in March as an extension of benefits from the CARES Act, which passed a year earlier, expired September 6. With the expiration of those benefits, many people expected the labor shortage to dissipate as people were forced back to work. But according to a new report, this has not yet happened.

Bloomberg News reported this week that although two weeks have passed since the enhanced unemployment benefits expired “employers who expected an increase in job applications are still largely waiting for them to roll in.”

“People who were on the sidelines generally remained on the sidelines,”  Richard Walkist, chairman of the American Staffing Association, told Bloomberg. “Nothing has changed when it comes to depressed benefits, and people’s needs continue to grow . . . I hope there will be more incentives for people to come back when they look at their bank accounts and realize that we are in the holiday season.”

“We’re only going to see the impact of the federal UI benefits ending a couple of months from now—I don’t think we’re going to see a big spike one way or another, really,” AnnElizabeth Konkel, an economist at Indeed Inc., told the news service. “We thought things should be better by Labor Day and they’re not.”

Earlier this summer, more than half of the states in the United States opted out of the expanded unemployment benefits early, which has somewhat blunted the effect of the benefits running out for the rest of the country.

However, the idea that the enhanced benefits were the reason for the labor shortage has been something of a controversial one. A recent survey, for instance, found that millions of people have not yet returned to work due to “COVID concerns.”

Meanwhile, there is an effort in Congress to bring back the enhanced unemployment benefits. Rep. Alexandria Ocasio-Cortez (D-NY) plans to introduce legislation to extend those benefits to 2022, making them retroactive to the September 6 end date and lasting through February 2022, according to CNBC.

“I’ve been very disappointed on both sides of the aisle that we’ve just simply allowed pandemic unemployment assistance to completely lapse, when we are clearly not fully recovered from the consequences of the pandemic,” Ocasio-Cortez said in a statement, as cited by CNBC. It’s unclear, however, if there is sufficient support in Congress to pass such as extension. Ocasio-Cortez told the news outlet that she “simply could not allow this to happen without at least trying.”