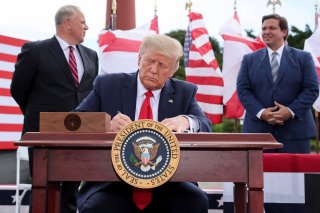 Florida Gov. Ron DeSantis (R) will nix an unemployment benefits program issued by President Donald Trump, as the state struggles to meet the financial threshold to continue to qualify for the federal boost.

Trump signed an executive order in early August that established the Federal Lost Wages Assistance Program, requiring states to spend at least $100 per person weekly through the state-level jobless benefits relief in order to receive the additional $300 per week payments to each Floridian created in Trump’s program. Florida, however, has a frail unemployment program, forcing the state to fail to meet the financial gate to the federal program.

The Sunshine State’s weekly payments reach $275 per person, one of the lowest in the country, with some Floridians making much less than that. Since the state provides jobless Americans little relief, DeSantis, a close ally of Trump, had to scrap the program after Florida gathered three weeks of the federal aid, making the state the first to terminate the program.

The Florida Department of Economic Opportunity made a brief announcement about the decision, noting that the fourth week would be the “last week” of federal unemployment benefits.

To continue to receive the federal relief created in Trump’s program, the state would have to boost its unemployment benefits to each Floridian. The cost associated with that increase could amount to amount to $200 million for just two more weeks of the additional payments, one state senator told Politico.

Lawmakers from both sides of the aisle raised their eyebrows at DeSantis’s move, as the coronavirus pandemic has triggered an economic slowdown leaving hundreds of thousands of Floridians unemployed. Over three million people in the state have filed for state or federal unemployment benefits since mid-March.

Although it’s unclear as to why DeSantis shut down the program, officials close to the governor suggested that the expensive costs associated with the program had something to do with it.

Trump’s executive order served as a buffer as congressional negotiations about the next coronavirus relief package remain stalled. House Democrats want to extend the $600 weekly unemployment bonuses established in the CARES Act that expired July 31, but the group has received constant pushback from Republicans, as some are balking at pumping billions more of federal funds into the economy.

The order also allowed governors to apply any unused funds from the CARES Act to supply the money needed to meet the financial threshold, but DeSantis has decided to spend it on the state’s coronavirus and budgetary needs.

According to Politico, nearly 368,000 Floridians are collecting state-level unemployment bonuses, a significant cut from its peak at 2.5 million.