Food Prices Will Continue to Climb in 2022 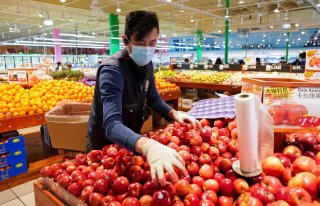 There’s little doubt that one of the chief driving forces behind the current red-hot inflationary pressures is fast-rising food prices.

According to the Bureau of Labor Statistics’ January Consumer Price Index report, cereals and bakery products saw the largest price increase of any food category at 1.8 percent, followed by dairy at 1.1 percent, fruits and vegetables 0.9 percent, and meat, poultry, fish, and eggs 0.3 percent.

Furthermore, according to data from IRI, a Chicago-based market research firm, prices of meat, seafood, produce, cereal, and other kitchen staples surged by a staggering 9 percent in 2021 alone.

If what goes up must come down, does that mean there will be some relief on the way to help out struggling American consumers? Not so fast, says one strategist.

“Part of the problem beyond the cost of raw materials is the packaging materials—80 percent is made in mainland China,” Burt Flickinger, Strategic Resource Group’s Managing Director, told Yahoo Finance.

“And that applies to salt and snacks, cookies and crackers, all the way to sports beverages. So, prices [are] high and going higher,” he continued.

“In the retail sales increases, about 50 percent to 60 percent of that is inflation, not increased unit sales,” he noted.

“So, we’re in a supply chain crisis and an inflation crisis, the worst we’ve seen in 40 years, dating back to 1982. And we’ll continue to be bad for the balance of this year,” he warned.

Similar sentiments were shared by Kevin Cummins, the chief economist at Natwest Markets.

“The factors that have driven inflation higher in 2021 are only expected to dissipate gradually and are likely to keep pushing inflation higher through the first half of 2022,” he told MarketWatch.

There’s no question that high inflationary pressures have taken aim at other important sectors as well. For example, CNBC recently reported that soaring lumber prices have added nearly $19,000 to the cost of a new home, further exacerbating the already highly competitive housing market.

“That is adding to the cost of both building a new home and remodeling an older one,” the business news outlet wrote.

“It also added nearly $7,300 to the cost of the average new multi family home, which translates into households paying $67 a month more to rent a new apartment,” the report continued.

In addition, as recently reported by National Public Radio, rent costs in Austin and Orlando climbed by roughly 30 percent or more last year, according to a survey conducted by the real estate firm Redfin. Certain cities in Florida, New York, and New Jersey also have witnessed particularly sharp jumps in rent prices.