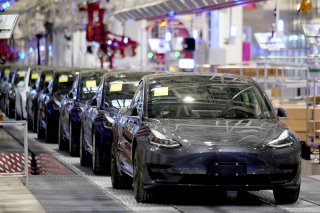 Amid sky-high gas prices that are continuing to set new records on a daily basis, it appears that electric vehicles (EVs) are gaining more mainstream traction.

According to Automotive News, citing Experian data, registrations for new EVs skyrocketed 60 percent in the first three months of this year. This was all the more impressive considering the fact that new car registrations were actually down 18 percent overall.

EVs now account for an all-time high of 4.6 percent of the overall market.

Tesla vehicles predictably boasted the most new EV registrations with 113,882, representing a whopping 59 percent of EVs registered during that period. Kia was second with 8,450 registrations, followed by Ford with 7,407, and Hyundai with 6,964.

“This big jump in EV ownership raises the question of whether the U.S. has finally turned the corner on mass adoption of electric vehicles,” writes senior autos reporter Pras Subramanian at Yahoo Finance.

“One reason for more registrations is that there are simply more EVs for sale in the U.S. than in the past. Cars like the Kia EV6 and Niro EV, sister brand Hyundai’s Ioniq 5, and Ford’s Mustang Mach-E, all posted registrations in the thousands in Q1, big jumps from a year ago,” he continues.

However, Subramanian noted that more progress needs to be made on infrastructure and affordability to make EVs even more mainstream.

“There needs to be more investment in the charging infrastructure here in the U.S. to limit concerns like range anxiety that plague many potential EV buyers,” he explains.

Gas prices nationwide, meanwhile, are currently sitting at $4.59, according to AAA data—a nineteen-cent jump from a week ago and a forty-two-cent increase from when the national record was broken in mid-March. The data also revealed that every state is averaging at least $4 a gallon.

“Prices later this week could be closer to $5 per gallon than $4, as demand continues to edge higher and inventories of both gasoline and diesel continue to decline, temperatures warm and motorists get back outside and we near the Memorial Day weekend, the start of the summer driving season,” Patrick De Haan, head of petroleum analysis at GasBuddy, said in a release.

“While the increases may start to slow in the days ahead as pump prices catch up to oil, there isn’t much reason to be optimistic that we’ll see a plunge any time soon,” he concluded.