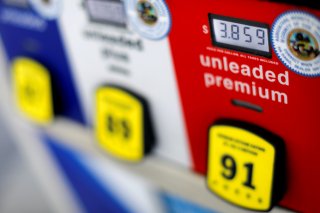 The fall surge in gas prices continued in the past week, as oil prices have continued to rise and that of gasoline along with them.

In fact, the average gas price in the U.S. reached $3.36 per gallon Monday, an increase of 3.8 cents from a week earlier, according to GasBuddy. Despite some expectations that gas prices would fall from the summer into the fall, the average has jumped 17.1 cents in the last month, and $1.21 a gallon from this time last year.

“Gas prices continued to soar in a majority of the nation over the last week as oil’s meteoric rise pulls gasoline and other refined product prices higher,” Patrick De Haan, head of petroleum analysis for GasBuddy, said in the organization’s blog. “But, there may be some light at the end of the tunnel.”

Demand dropped slightly week after week, but that was no match for the rising tide of oil prices.

“The sharp rise we’ve seen over the last three weeks should begin slowing down soon, barring another jump in the price of oil,” according to the blog. “This is because gasoline prices have now largely caught up to the jump in oil that started nearly a month ago. This isn’t an all-clear for the future, however, as oil prices could rise again at any time. But for now, oil has held around $83 per barrel, and without a further climb, gas price increases should slow down soon in the bulk of the nation.”

The most common price in the United States was $3.29 per gallon, with $3.27 a gallon considered to be the median price.

The other weekly report, from AAA, also noted a huge rise—with the average price going up six cents to $3.38. That report used a Halloween theme, with the headline “GHASTLY GAS PRICES HAUNT CONSUMERS AT THE PUMP,” and leading with “the recent surge in the price of gas may seem spooky this Halloween, but it’s not frightening people away from driving as demand continues to rise.”

“With the U.S. economy slowly recovering from the depths of the pandemic, demand for gas is robust, but the supply is tight,” Andrew Gross, an AAA spokesperson, said in the report. “We haven’t seen prices this high since September of 2014.”

Of the states, North Carolina and Florida each saw a fourteen-cent average increase week over week, while Arizona jumped twelve cents, Rhode Island and New York increased by eleven cents, and New Hampshire, Connecticut, and New Jersey each saw increases of ten cents from the week before. Pennsylvania and Texas went up nine cents.