Gas Prices Expected to Rise Even Higher in the Summer 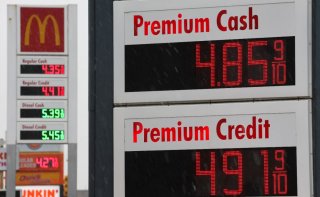 The average national gas price is still sitting at a fourteen-year high above $4.30, further straining the pocketbooks of Americans already trying to navigate their way through a period of high inflation. If what goes up must eventually come down, then can American drivers really expect gas prices to reverse their weeks-long upward trend?

Not so fast, some experts say. “Forget the $4 per gallon mark, the nation will soon set new all-time record highs and we could push closer to a national average of $4.50 per gallon,” Patrick De Haan, head of petroleum analysis at GasBuddy, recently noted in a statement.

“California could be heading for $5.50 per gallon with more stations charging $6 and beyond. We’ve never been in this situation before, with this level of uncertainty. As we lose a major global producer under the weight of deserving bipartisan sanctions for invading a sovereign country, the cost is high,” he continued.

De Haan concluded by claiming that “Americans will be feeling the pain of the rise in prices for quite some time, with little good news foreseen.”

Similar sentiments were shared by Scott Shelton, an energy specialist at ICAP, a commodity and currency investment inter-dealer broker. “Unfortunately, I see prices going higher from here,” he told Fortune.

Shelton added that “we could see a national average of between $5 to $6 per gallon all summer long, with diesel prices even higher.”

One major reason for this pessimism is the fast-approaching summer driving season. “We’re not really building the gasoline stockpiles that we would typically see in the shoulder season to prepare us to have a lot of supplies in place for summer,” Rebecca Babin, senior energy trader and derivative strategist, told Fortune.

“That means that when summer comes and people start driving more, we’re going to have a harder time meeting that demand and prices will go up,” she added.

Meanwhile, frustrated President Joe Biden took to Twitter to demand a faster drop in gas prices as oil tumbled in recent days. Brent oil has fallen by 28 percent between the March 6 intraday peak and Tuesday’s close.

“Oil prices are decreasing, gas prices should too,” Biden tweeted. “Last time oil was $96 a barrel, gas was $3.62 a gallon. Now it’s $4.31. Oil and gas companies shouldn’t pad their profits at the expense of hard working Americans.”

Per CNN Business, such price action is nothing new. And the oil and gas industry even has a nickname for this practice: “rockets and feathers.”

“This has been going on for 40 years,” Andy Lipow, president of consulting firm Lipow Oil Associates, told the news outlet. “Prices do dip, it just seems to take a long time. You can’t deny the data that is out there.”