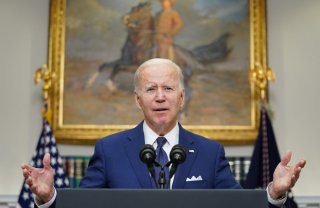 With the highly anticipated decision from President Joe Biden to forgive student loan debt nearing, one of the biggest student loan companies in the nation believes that borrowers can count on getting $10,000 in relief.

Per Insider, the Lincoln Journal Star has reported that Jacque Mosely, the director of government relations at the student loan company Nelnet, said that “the probability’s pretty high” that Biden will wipe clean $10,000 per borrower.

Furthermore, Jeff Noordhoek, the company’s CEO, reportedly called the $1.75 trillion in total student debt in the country “a big number. In fact, it’s too big.”

The Nebraska paper noted that outstanding student loan debt has ballooned more than fivefold in less than two decades—from $330 billion in 2003 to $1.75 trillion last year, according to the Department of Education.

However, Noordhoek did say that forgiving that debt wouldn’t necessarily solve the fast-rising costs of higher education, largely due to the fact that people would still keep on borrowing after Biden’s decision.

According to the College Board, average tuition and fees for the 2021-2022 academic year rose by 1.6 percent to $10,740 for in-state students at four-year public colleges. Meanwhile, at four-year private institutions, tuition trekked higher by 2.1 percent to $38,070.

“This year’s incoming freshman class will rely on loans even more in pursuit of a degree at a public college or university,” CNBC recently wrote.

Moreover, data from the Institute for College Access & Success indicate that about 70 percent of college seniors graduate in the red, with each borrower owing nearly $30,000. And the average high school graduate this year could potentially take on as much as $39,500 in student loans, according to a NerdWallet analysis of data from the National Center for Education Statistics.

Meanwhile, there appears to be plenty of pushback among some Washington lawmakers. In fact, Sen. Mitt Romney (R-UT) and several of his colleagues have introduced the Student Loan Accountability Act, which aims to prohibit the Biden administration from broadly canceling student loan debt. Since taking office, Biden has already forgiven more than $17 billion in student loan debt for about 725,000 borrowers.

“It makes no sense for the Biden Administration to cancel nearly $2 trillion in student loan debt,” Romney stated in a release. “This decision would not only be unfair to those who already repaid their loans or decided to pursue alternative education paths, but it would be wildly inflationary at a time of already historic inflation.”