Headed for a Downturn? Economists Fear Stagflation Is Next 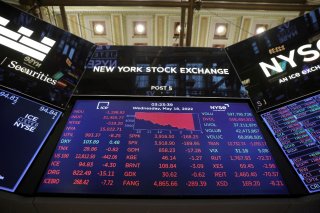 Recession fears may be grabbing plenty of headlines these days, but it appears that stagflation is on the minds of most economists.

A new survey released by the Securities Industry and Financial Markets Association (SIFMA) is showing that 80 percent of economists believe that stagflation—a term coined in the 1970s when there was simultaneous high inflation and economic stagnation or high unemployment—is the greater long-term risk to the U.S. economy.

“We are seeing clear signs of improvement, reaching that light at the end of what has been a very long and very painful tunnel. At the same time, many of last year’s risks still remain, complicating the outlook for the domestic recovery: policy risks, inflation risks, supply distortions, an ongoing labor supply shortage, and more recently international conflict and more aggressive monetary policy, just to name a few,” Dr. Lindsey Piegza, chief economist and managing director at Stifel Financial Corporation and chair of SIFMA’s Economic Advisory Roundtable, said in a release.

“While we have seemingly made it past one crisis, another lurks around the corner as the Fed raises rates, potentially enough to stall consumers and businesses, and choke off domestic economic growth entirely,” she continued.

The poll comes on the heels of the World Bank’s latest global economic forecast, which contended that a period of stagflation similar to what was witnessed in the 1970s is certainly a possible scenario in the months ahead for the global economy.

Global growth is expected to slump from 5.7 percent in 2021 to 2.9 percent in 2022, which is considerably lower than the 4.1 percent that was predicted last January. Growth will likely hover around that level from 2023 to 2024 while hot-running inflation remains above target in most countries. Meanwhile, growth in advanced economies is projected to decelerate from 5.1 percent in 2021 to 2.6 percent in 2022—1.2 percentage points below estimates in January.

“The war in Ukraine, lockdowns in China, supply-chain disruptions, and the risk of stagflation are hammering growth,” World Bank president David Malpass said in a statement.

“Markets look forward, so it is urgent to encourage production and avoid trade restrictions. Changes in fiscal, monetary, climate and debt policy are needed to counter capital misallocation and inequality,” he added.

Meanwhile, per CNBC, Federal Reserve chairman Jerome Powell told congressional lawmakers on Wednesday that the central bank is solely focused on bringing down inflation and has the necessary tools to do so.

“At the Fed, we understand the hardship high inflation is causing. We are strongly committed to bringing inflation back down, and we are moving expeditiously to do so,” he said in his remarks to the Senate Banking Committee. “We have both the tools we need and the resolve it will take to restore price stability on behalf of American families and businesses.”

Powell added that achieving a soft landing will likely be difficult.

“It is our goal. It is going to be very challenging. It has been made significantly more challenging by the events of the last few months, thinking here of the war and commodities prices and further problems with supply chains.” he said. “The question of whether we’re able to accomplish that is going to depend to some extent on factors that we don’t control.”