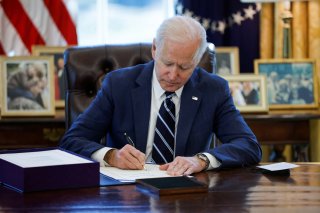 The expanded credit expired at the end of 2021, and Congress failed to renew it. So, in January, the first month that the credit payments did not take place, 3.7 million more children were in poverty than the previous month, the Center on Poverty & Social Policy reported. This was enough to bring the poverty rate from 12.1 percent to 17 percent in just one month.

The figures are out for February, and while they’re not as bad as January’s, they’re still not great. For example, the child poverty rate was 16.7 percent in February, compared to 17 percent in January, although six million more people were in poverty in February compared to December.

According to the Center, “Monthly poverty remained elevated” in February, the second month since the expiration of the expanded credit. The report found that in February, 12.3 million children were in poverty, compared to 12.57 million in January. In December last year, the number of impoverished children was 8.9 million.

Some media outlets, including Fox Business, wrote this week about the Columbia data.

Some Democrats in Congress are pushing for a return of the 2021 version of the child tax credit, and a handful of Senate Democrats wrote to the president and vice president in early January calling for them to revive the credit.

"The expanded CTC represents the biggest investment in American families and children in a generation. From July to December 2021, the monthly payments of $250 per child aged 6-17 and $300 for children under age 6 reached more than 35 million families. “Nearly nine in ten American children benefited from these payments, which enabled their families to afford rent, put food on the table, and pay for child care so their parents and caregivers could stay in the workforce,” the letter from the senators said. “Data from the Census Bureau show 91 percent of low-income families spent their payments on basic necessities like groceries, utilities, housing, and school-related costs.”

However, it’s unclear if there is any legislative path for the credit’s revival.