Is a High-Tech Police Department the Answer to Rising Crime? 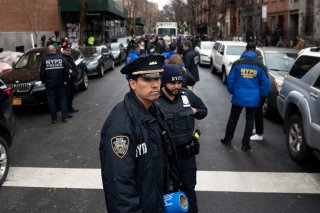 A recent Gallup poll indicates that Americans are more worried about crime than at any point since 2016. Unsurprisingly, those living in cities are particularly alarmed—city dwellers’ concern about crime has increased by a shocking 9 percent just in the past year, largely thanks to the record-high homicide rates recorded in many urban areas across America.

New York City is a particularly visible example, with the recent attack on the city’s subway system a brutal reminder of how out of control the city’s crime situation has become. After years of facing criticism for being “overzealous” and unfairly aggressive, New York’s finest are now being blamed by many activists and politicians for not doing enough to stop the Brooklyn shooter and taking too long to catch him.

As NY gov. Kathy Hochul remarked in the wake of the subway attack, “we are sick and tired of reading headlines about crime; it has to stop.” What’s more, pragmatic liberals have begun backtracking on their calls to scale back law enforcement and institute supposedly progressive policies such as the elimination of cash bail, and some have even begun adopting the “tough on crime” rhetoric more typical of Republicans.

It’s quite a turnaround, after years in which large funding reductions—such as former Mayor Bill de Blasio’s sweeping cuts to the New York Police Department’s (NYPD) budget last summer—have systematically weakened the police forces protecting America’s large cities. With the midterm elections looming and crime rates rising, the question of how better to support the police forces keeping American cities safe must be at the center of the political agenda.

Facing a number of tough races this November, local politicians in charge of many of America’s largest cities, including New York, are looking to take a more aggressive and high-tech approach to crime. In large cities, the consequences of years of a soft approach on crime and limited support for the police is there for all to see. Transit crime in New York increased nearly 60 percent in a year, robbery 48 percent, and grand larceny by 55 percent. Despite the statistics, some commentators continue to argue that increasing the NYPD’s budget and officer ranks now are superfluous.

If politicians at the local level truly expect to establish credibility on crime, they must support efforts to equip America’s police forces with the right tools that can enable them to do their job efficiently. This must go beyond financial support—supporting the police also means giving them the most cutting-edge tech and tools available. Some innovations have already been implemented in pro-police jurisdictions with positive results, such as Coplogic—cloud-based software which streamlines accident and citation reporting—and Shotspotter, which uses acoustic sensors to detect gunshots, allowing police to respond faster to instances of gun violence. Given the staggering crime statistics, it’s encouraging that New York City mayor Eric Adams seems to support a technology-first strategy by pushing for a high-tech weapons detection system for the NY subway.

The proposals build upon the NYPD’s decision to adopt Esper, a cloud-based software that will enable the NYPD to more easily enforce its police regulations. In a recent interview, Esper’s CEO, Maleka Momand, revealed that the NYPD would be using the system to “rewrite their police manual and then syndicating it to the police force.” Given that the NYPD has a 3,000-page procedural manual requiring frequent updating, such a solution was sorely needed.

Esper’s system offers a double advantage, streamlining officers’ operational policies and giving them an official resource at their fingertips to rely on during citizen interactions. As Momand explained, it also allows the NYPD to track infractions against the police manual and places where the rules of engagement with citizens was unclear—something which could play a pivotal role in allowing the force to engage in common-sense police reform. The growth of tech, including apps like Esper, is revolutionizing law enforcement and is vital to keep up with—yet far too few jurisdictions are modernizing their processes.

President Joe Biden has called for greater support and funding for the police, but in order to build credibility on crime, politicians will also need to embrace technological innovation and invest in tools like Coplogic, ShotSpotter, and Esper. Unless the shift to tough-on-crime rhetoric which we are currently witnessing translates into concrete financial and material support for the police, nothing will change, and crime rates will continue rising until city administrations face a reckoning at the ballot box.