The History of Social Security 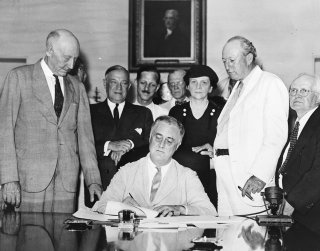 President Franklin Roosevelt signed the Social Security Act into law on August 14, 1935, and created a program that would pay monthly benefits to retired workers starting at age sixty-five or older. The act further established a payroll tax to fund the program, while it required employers to withhold the tax from employee wages.

For the first five years of the program, until 1940, the government actually paid Americans their benefits via a single lump-sum payment. The purpose was to help individuals by giving back some of the money that they had put into the system, and most of those were people who would not be contributing long enough due to age or other work-related reasons. As expected, the amounts paid out weren’t very large, and the first-ever social security check was for just $0.17.

Ida Fuller was the first person to receive a monthly benefit. Her first check was for $22.54. Fuller, who worked as a legal secretary, collected payments until she was one hundred years old. Monthly payments to retired workers have continued since then and have increased to an average of $1,464 per month in January 2019.

Yet it wasn’t until October 1950 that Congress authorized the first cost-of-living adjustment (COLA). It increased payments at the time by 77 percent. The next big change came in 1956 when the Social Security Act was amended to provide benefits to disabled workers fifty to sixty-four years old, as well as disabled adult children.

Four years later, President Dwight Eisenhower signed a law that further amended the disability rules, which permitted the payment of benefits to disabled workers of any age and to their dependents.

When President Roosevelt signed the Social Security Act into law, it was meant to provide for the retirement of elderly Americans. Yet, largely forgotten is the fact that Roosevelt was just fifty-three years old when he signed that law, and he passed away at age sixty-three in 1945 and wouldn't have been eligible to receive the benefits.

The federal government was actually rather wily in how the law was written. Life expectancy at birth in 1930 was fifty-eight for men and sixty-two for women, yet as noted the age of retirement was set at sixty-five. The government was essentially counting on the fact that there wouldn’t be many people receiving payments for years or decades to come.

In July 1975, the first annual automatic COLA, an 8 percent increase, was paid. Before 1975, each COLA required authorization by Congress. Five years later, social security beneficiaries received the highest annual COLA increase ever—14.3 percent. This was notable too as the inflation rate in 1980 was 12.5 percent.

However, the 1980s also saw another significant change to Social Security, when in 1985 benefits became taxable for people who earn above a certain amount.

Even in retirement, there is no way to escape taxes.