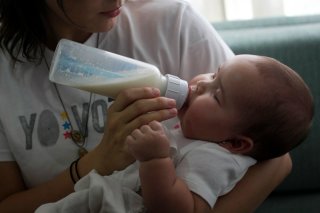 The House on Wednesday night passed two bills aimed at addressing a nationwide shortage of baby formula, which is largely due to the shuttering of a Michigan-based Abbott Nutrition facility because of a bacterial contamination.

The main piece of legislation—sponsored by Rep. Rosa DeLauro (D-CT)—would provide $28 million in emergency funding to the Food and Drug Administration (FDA) to help it streamline inspections of formula made at plants overseas and to protect against any future shortages.

As reported by NBC News, DeLauro noted that most of the money in the legislation would pay for additional FDA employees, including inspectors who could help approve domestic or international formula manufacturing companies.

“The FDA plays a critical role in ensuring formula provides the full nutritional needs of infants and that it is manufactured in the safest way possible. We must ensure that a lack of funding is not a barrier to getting safe formula to parents and babies. The bill before us does just that,” DeLauro said on the House floor.

“In the wealthiest nation in the world, babies should not be at risk of going hungry. Parents should not have to play a guessing game and wonder if the food that they are giving their babies is safe,” she continued.

Senate Majority Leader Chuck Schumer (D-NY) acknowledged that he will try to pass the Senate version of the bill this coming week. “We hope no one will block it,” he said. “It is such an immediate need.”

Another bill passed on Wednesday—called the Access to Baby Formula Act and sponsored by Rep. Jahana Hayes (D-CT)—would allow more formulas to be purchased with benefits under the Special Supplemental Nutrition Program for Women, Infants, and Children.

Ahead of the votes, there was immediate pushback by some House Republicans. Rep. Guy Reschenthaler (R-PA) contended on the House floor that the legislation “does nothing—I repeat, nothing—to put more formula on store shelves or hold Biden’s FDA accountable for ignoring this crisis.”

Meanwhile, House Minority Whip Steve Scalise (R-LA) asserted that Speaker Nancy Pelosi (D-CA) proposed the legislation “in hopes of covering up the administration’s ineptitude by throwing additional money at the FDA with no plan to actually fix the problem, all while failing to hold the FDA accountable.”

The House action comes on the heels of President Joe Biden’s announcement that he was invoking the Defense Production Act to increase baby formula manufacturing. The president is requiring suppliers to direct ingredients to baby formula manufacturers before any other companies who may have placed orders for those same goods. Furthermore, the Health and Human Services Department and Department of Agriculture are being directed to use aircraft from the Defense Department to pick up and transport infant formula from abroad that meets U.S. health and safety standards.