How Andrew Cuomo’s Fall From Grace Was Inevitable 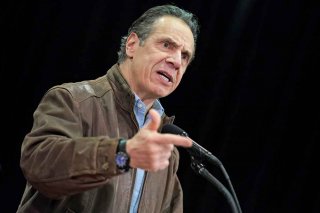 Jean-Jacques Rousseau famously mocked the cosmopolitan elites of his day for concealing with “gilt and tinsel” their moral deformities. “The honest man is an athlete,” he wrote, “who loves to wrestle stark naked.” In our time, New York Gov. Andrew Cuomo may want to refrain from scuffling in the buff, now that he is embattled after getting cross with the fairer sex. But Rousseau’s remarks about elite put-ons, and the moral depravity that conceals, are nevertheless apt.

Until recently, Cuomo enjoyed general admiration for his approach to the coronavirus. Media coverage of Cuomo often cast him in favorable contrast to Donald Trump.

While Cuomo’s star sailed high, a pitiless cover-up of thousands of deaths went on below. The governor had quietly turned New York into a charnel house for the elderly.

After months of opacity, New York revealed the true death toll of long-term care residents at more than fifteen thousand since the start of the pandemic. Until recently, the state’s health department reported roughly eighty-five hundred care home casualties.

In late March of 2020, Cuomo’s administration directed nursing homes to accept patients infected with the coronavirus. In theory, the directive would provide relief for overwhelmed New York hospitals. In reality, it was like throwing grenades in nursing homes. So, Cuomo attempted to draw a veil over the gruesome consequences. “Court orders, leaks, and investigations revealed that Cuomo dramatically and intentionally understated the pandemic’s toll on nursing home residents in New York,” reported Rachel Cohrs, a Washington correspondent for STAT.

When the story broke, Cuomo continued presenting himself as calm and collected, admitting vaguely to something, but not the mandate that directly resulted in thousands of deaths. Indeed, Cuomo seemed to chalk it up to a miscommunication that occurred because he and his staff were “too focused on doing the job and addressing the crisis of the moment.”

“The void we created by not providing information was filled with skepticism, cynicism, and conspiracy theories which furthered the confusion,” Cuomo said in a press conference on Feb. 17. “I take responsibility,” he rambled on, “we should have provided more information faster.” In other words, Cuomo accepts responsibility for your ignorance of his competence and tireless greatness.

Cuomo’s cool-headed façade gave way shortly after that press briefing when the details of an exchange between the governor and Democratic Assemblyman Ron Kim emerged in CNN on Feb. 17.

“Gov. Cuomo called me directly on Thursday to threaten my career if I did not cover up for Melissa [DeRosa] and what she said,” Kim told CNN. “He tried to pressure me to issue a statement, and it was a very traumatizing experience,” Kim said. DeRosa is an aide to the governor who informed lawmakers in a private virtual conference that New York had delayed sharing with the legislature the real nursing home death toll due to concerns about a potential federal investigation by the Justice Department. According to Kim, Cuomo warned him, “we’re in this business together and we don’t cross certain lines and he said I hadn’t seen his wrath and that he can destroy me.”

Kim claimed to have received several calls from a “No Caller ID” number in the days that followed, accompanied by the governor’s aides saying Cuomo wanted to follow-up. This abusive behavior is not unusual for the Cuomo administration.

Lindsay Nielsen, an investigative reporter, told Fox News that “one of the reasons” she quit Albany-based News10 in 2017 was because of harassment from the Cuomo administration. Nielsen claimed Cuomo’s aides would call late at night to threaten and shout at her. She said Cuomo’s team has the “power to kill stories” locally, so it wouldn’t be surprising if they suppressed the nursing home scandal. “I saw it happen. I wouldn’t misjudge the power of the intimidation and the tactics,” she said.

According to Enck, Howard Glaser, who served as Cuomo’s director of state operations, called around midnight, telling her she was “f__ing the governor” politically after the EPA had filed comments unfavorable to the state’s impact studies on hydrofracking, the Times Union reported. There are many such cases of abuse by Cuomo’s administration.

But all this was not the real spark of controversy. Not the abuse, not the lies. The media reported on the misdeeds of the man who had become their presidential hopeful—but Cuomo still stood pretty strong, with most of the calls for his resignation coming from Republicans. It wasn’t until sexual harassment claims began rolling in that he drew serious fire from Democrats that turned into calls for him to quit.

As of March 9, five women have accused Cuomo of sexual harassment or inappropriate behavior—and that, not the nursing home scandal that left thousands dead and the attempted cover-up, prompted broad calls for his resignation.

“Under immense public and political pressure, the governor’s office asked the state attorney general to appoint someone to conduct an outside investigation into the sexual harassment claims against Mr. Cuomo, a Democrat,” the New York Times reported. Attorney General Letitia James already has attorneys blazing forward with an inquiry, including Joon Kim, a former top federal prosecutor. One woman claims Cuomo asked at a wedding, “Can I kiss you?” Top Democrats in New York’s legislature have withdrawn their support for Cuomo and demanded his resignation.

In a twist, Sen. Kirsten Gillibrand, a New York Democrat, came to Cuomo’s defense. “Asking every female elected in our state when a person should resign or not resign really isn’t the conversation we should be having,” she told Yahoo Finance. Gillibrand was quick to call for Sen. Al Franken’s resignation in 2017 amid sexual harassment claims.

There are many layers to this story. On the one hand, it highlights how the purveyors of sexual liberation are positively puritanical. The Left’s view of what constitutes appropriate male-female social interactions is more conservative than what your average self-identified conservative holds is appropriate. On the other hand, it reveals the absurd priorities and moral bankruptcy of American elites.

Democrats generally appeared willing to ride out the storm of the nursing home scandal. It was not until the issue of sexual harassment emerged that the message of resignation began to amplify. Now, there is talk of impeachment. Cuomo insists there is “no way” he steps down. Thus, there are two possibilities. Either Democrats and the left find sexual harassment a greater sin than the slaughter of senior citizens, or they waited until those allegations arose to oust Cuomo, using them to save institutional face for nursing home deaths.

The reality is probably a mixture of the two. Still, the answer, in any case, is nevertheless the same: American elites, in politics and media, are beholden to a morally bankrupt, deranged worldview incapable of prioritizing human life. Cuomo’s critics who held back until the sexual misconduct allegations to attack him for the nursing home scandal are just as bound to it as the ideologues. In a very real, now fatal sense, it prevents them from governing and compels them to live by lies.

Of course, it’s not presented as such, but rather it is draped in slogans of equality, inclusivity, and virtue. But these are all “external ornaments,” as Rousseau put it, designed to conceal the hideous face of a ruling class that seldom lives up to the maxims it professes.