How Donald Trump Might Take Full Control of the GOP 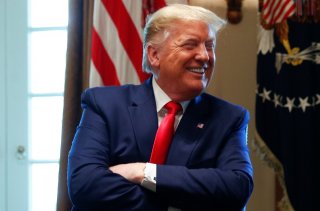 The recent string of Senate Republican retirements of the caucus’s biggest bipartisan-minded institutionalists cracks open a window of opportunity for former president Donald Trump to push his wing of the party onto the Senate floor, complicating sought unity within the GOP.

Sen. Roy Blunt’s (R-Mo.) surprise announcement this week is the latest of the chamber’s exits, as there are now five GOP senators who are calling it quits, largely from the party’s governing wing of the Senate.

“I think about just the years of legislating that they have brought to these discussions, it’s going to be a real loss. A loss for the institution really,” Sen. Lisa Murkowski (R-Alaska)—who is still debating whether she’ll run for reelection—said.

“Over the years, Congress has changed and we’ve seen different leaders rise, perform and leave. … But it just seems like, it seems like, we’re losing so much of that substantive tenure in a very short period,” Murkowski added.

Besides Blunt, Republican Sens. Pat Toomey (Pa.), Rob Portman (Ohio), Richard Burr (R-N.C.) and Richard Shelby (Ala.) are all slated to retire ahead of the 2022 midterm elections.

While new waves of lawmakers are always crashing into Congress, the movement of the GOP’s well-known dealmakers is considerably significant, as the party battles how to navigate politics and loyalty in a post-Trump era.

In Pennsylvania—a state that President Joe Biden narrowly flipped in the 2020 election—Trump and his supporters have shifted their focus to swiping Toomey’s seat and replacing it with a Trumpism aligned lawmaker.

In Ohio, a rush of Trump-like lawmakers have launched campaigns for Portman’s seat, including former state party chairwoman Jane Timken, who dubbed herself as a “conservative disrupter,” devoted to kicking out moderate allies of John Kasich, an anti-Trump Republican and former governor. Timken joined a field of contenders including former state treasurer Josh Mandel, who has vowed to uphold Trump’s agenda.

Several Missouri Republicans have floated the notion of a Senate run, presenting another bright moment for the Trump wing to seize control of a chamber seat. Among those reportedly considering a run is former governor Eric Greitens (R), perhaps one of the most avid Trump loyalists in the GOP. When the former president saw defeat in the 2020 election, Greitens repeated the baseless claims of voter fraud and insisted that it was “impossible” that Biden won.

Greitens was elected governor in 2016 but resigned two years later amid the aftermath of a brutal sex scandal and ethics investigation. A group of Missouri Republicans, however, still backed Greitens, arguing that he was unfairly prosecuted.

In Alabama—a state that’s been red for nearly half-a-century—Shelby’s seat will almost certainly be grabbed by a Trump-like lawmaker.

“The wave of GOP Senate retirements—some from states Trump carried by a landslide (Alabama) others from states he barely won (North Carolina) or lost (Pennsylvania)—say a lot about how unpleasant it has become for traditional conservatives to serve in the Senate. That well-regarded Senators who could look forward to serving for another [two to three] terms don’t want to keep their jobs is astonishing,” J. Russell Muirhead, a democracy and politics professor at Dartmouth College, said in an email interview.

While the open seats present clear opportunities for the Trump wing to wedge its way into the upper chamber and take back control, the Democrats are eyeing the openings for themselves. However, this remains to be seen as some states, like Missouri and Ohio, are trending toward the GOP.

“Unless the sea of lawsuits that Trump faces result in his being disgraced in the eyes of his supporters, which so far has not occurred, the odds are that pro-Trump Republicans will indeed gain nomination and election in red states. Most of these Republicans regard support for any Democratic measure as shameful,” Rogers Smith, a political science professor at the University of Pennsylvania, said in an email interview. “The election of more would heighten divisions in the Senate as well as the nation, making party-line votes on all major issues even more prevalent.”

If the Trump wing of the party sees victory through the newly vacant seats, that would send a strong signal regarding how the party is moving and “where its base intends to take it.” Ever since the former president left the White House, the GOP has been ideologically scattered, battling to stay largely unified, considering its razor-thin minorities in both congressional chambers.

“It will continue the transformation of the GOP into the POT—Party of Trump—but that transformation has largely already occurred. The loss of the few remaining Never Trump Republicans has, moreover, been more than offset by the greater appeal to working class Americans of Trump Republican policies of tariffs, immigration restriction, and unilateralist foreign policies. The Party of Trump cannot be a majority party in the United States, but under existing American election rules, and the new ones that Republicans are enacting, it need not be to gain and hold on to power in much of the nation,” Smith said.

But experts also noted that extremist wings of the party tend to “perform” somewhat worse compared to more moderate candidates, as parties continue to evolve with new politics and presidencies.

“There is further evidence that ideologically extreme candidates perform worse than relatively moderate candidates, so if Trumpian candidates emerge as the nominees in these races, I would expect the Republican Party to lose even more votes,” Anthony Fowler, a public policy professor at the University of Chicago, said in an email interview. “This doesn’t necessarily mean that 2022 will be a bad year for Republicans in the Senate. The party of the president often loses support in the midterm elections, and there will be lots of red and purple states with seats up for grabs.”

Regardless, the retired seats offer the Republican Party a chance to either redefine its identity or sustain Trumpism and extremist politics.

“The election of 2022 will be where Republicans figure out what their Party stands for in the next presidential election and beyond,” Muirhead said. “Reagan redefined the Republican Party in 1980 and his definition lasted for 35 years. The departure of traditional conservatives from the U.S. Senate and their refusal to fight for the Party they believe in suggests Reagan’s conservatism is exhausted: what next?”