How Much Damage Did the Summer 2020 Riots Really Cause? 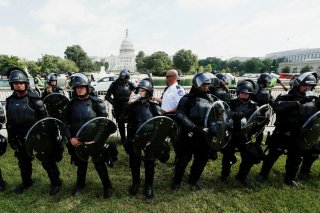 With the hearings into the January 6, 2021, Capitol insurrection underway, many on the political right have changed the subject to a different period of unrest in the recent past: When nationwide protests in May and June of 2020, following the killing of George Floyd in Minneapolis, spilled over into violence and vandalism in many U.S. cities.

One talking point that has been raised repeatedly is that the summer 2020 riots caused $2 billion in damages. In the last couple of weeks, that figure has been shared by The Daily Caller, Ricochet, and social media figures. Others have pointed out, citing that figure, that the damages from the 2020 unrest are sixty-six times more than that of the Capitol riot, as though property damage were the primary consideration.

There are quite a few myths about the unrest that followed Floyd’s death that summer. No, there were no cities that “burned to the ground,” nor did the riots go on continuously for months. It’s also not true that the national media “ignored” the violence and vandalism; on the contrary, it was aired on live television by every news network for several days.

And contrary to the widespread belief that everyone involved “got away with” their parts of the unrest, thousands of arrests were made around the country. In contrast, more than 862 people were arrested in connection with the Capitol riot.

But what of that $2 billion figure?

The source of it appears to be a single report, in September of 2020, from an organization called Property Claim Services (PCS), which describes itself as “the internationally recognized authority on insured property losses from catastrophes in the United States.”

As cited by Axios that same month, the figure was not $2 billion, but rather “at least $1 billion to $2 billion of paid insurance claims,” meaning costs to insurance companies rather than individual claimants.

This figure, if accurate, is the largest total in the history of civil unrest in the United States, eclipsing the $775 million figure of the Los Angeles Riots in 1992, with all other incidents a fraction of that. However, in “2020 dollars,” the 1992 riots are listed at $1.42 billion, which places it in the estimated range of the 2020 unrest.

It does not appear that PCS has updated that figure from two years ago, but the September 2020 estimate has been quoted repeatedly and nearly always rounded upward from “$1 to 2 billion” to “$2 billion.” PCS told Axios at the time that it wouldn’t reveal an exact dollar figure because “it wants to sell that data to clients.”

So the $2 billion figure may be true but it’s part of a range and it is an estimate that is nearly two years old that refers to the cost to the insurance industry, not the damage itself. It’s not necessarily a false claim, but it is thin.