How to Realize Diversity in the National Security Community 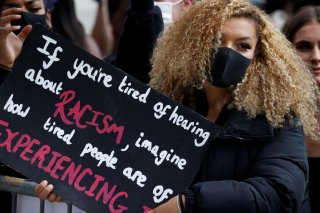 When she saw the video of George Floyd’s murder, Ambassador Bonnie Jenkins, an arms control expert who had spent years ascending the ranks of Washington’s national security elite, felt she had to act.

With the help of her colleague, Neda Shaheen, Jenkins penned an open letter titled, “Standing Together Against Racism and Discrimination,” from the organization she founded and leads, Women of Color Advancing Peace, Security and Conflict Transformation (WCAPS).

“America can no longer ignore the vast inequities that exist in this country,” they said. “To root out institutional racism, it is vital that we re-examine our implicit and explicit biases, as well as biases within our organizations. We share a common vision of a world where all people are treated equally, fairly, and with respect.” The letter rocketed through the national security community, garnering almost 200 co-signers from leading organizations and experts within days.

“We wanted to signify to the international community—and to our own communities here in the U.S.—our frustration with what was going on and the call that we need to make change,” said Jenkins in an interview for the podcast Press The Button.

The letter calls on the signatories to commit to substantive changes in the way they operate, whether that is diversifying their boards of directors, elevating the voices of people of color, or hiring from local and low-income communities.

One of the most important commitments involves bringing more diverse voices into the national security field. “There’s always been this question of why there aren’t more people of color in the nuclear field or some of these other ‘hard’ security issues,” said Jenkins, a former Naval Reserve officer. Part of it, she explained, is an American culture that sees white males as the archetypal policymaker. People of color working in these fields, particularly women, who naturally do not resemble this image, “are constantly told that they can’t make it. They’re constantly told that they’re not good enough.”

“At each one of those points, you can lose people,” continued Jenkins. “I’ve heard so many stories of people who have told me ‘I didn’t do this because somebody said I couldn’t do it.’ And it totally changed the trajectory of their life.”

A second factor is the barrier thought to exist between domestic and international issues. Though careful not to generalize, Jenkins explained that people of color are too often forced to choose between these two seemingly separate disciplines.

For many, the choice feels like it is made for them. “If you’re growing up as a person of color, you have these other things that make you focus on domestic issues,” said Jenkins, who served as program officer for U.S. Foreign and Security Policy at the Ford Foundation. “You have to get healthcare, you have to get voting rights, you have racism and discrimination. That’s naturally going to capture your attention because that’s about your very survival. It’s about your health. It’s about things that impact you.”

But this separation between domestic and international is an illusion, said Jenkins. “People are better understanding that what happens here with race relations does not have just a domestic impact, but it has an international impact on peace and security overall. These things are connected.”

That is especially true when it comes to policymaking, argued Jenkins, who was the lead coordinator for threat reduction programs at the State Department under President Barack Obama. The goal of modern statecraft is to peacefully manage the interactions between distinct and variegated countries and societies around the world. It should be a no-brainer that, in order to get the best results, we need “to make sure that there are diverse voices, diverse perspectives, and diverse cultures at the table when we’re making policies that are not just going to be affecting other countries, but affecting us as well.”

“And that includes not only promoting the women at the table. It’s also encouraging and maintaining the cadre of women of color, people of color who are in the field, to encourage them to stay in the field,” she said. “You have to keep encouraging them all through the process.”

“That’s what we’re looking at.”

The full interview with Ambassador Bonnie Jenkins is available here.